A man who knows a thing or two about the benefits of central bank accommodative measures on an economy is Philip Lane, the European Central Bank’s chief economist. After all, Mr. Lane was the head of the Central Bank of Ireland after the Celtic Tiger went to the brink of economic collapse post-2008. At the time, he led the rescue of the Irish banking system with non-standard measures conducted bilaterally and alongside both the European Commission and the ECB.

Therefore, when Mr. Lane speaks, we listen. Earlier this month, on September 4, he spoke at the London School of Economics on the successful benefits of the ECB’s previous quantitative easing (QE) programme.

For Mr. Lane, who is now a member of the ECB’s Governing Council (GC), there is no doubt that QE is supportive for the wider European economy. According to their own research, the ECB’s non-standard measures from 2014 to 2018 contributed positively to growth and inflation (see charts 1 and 2). 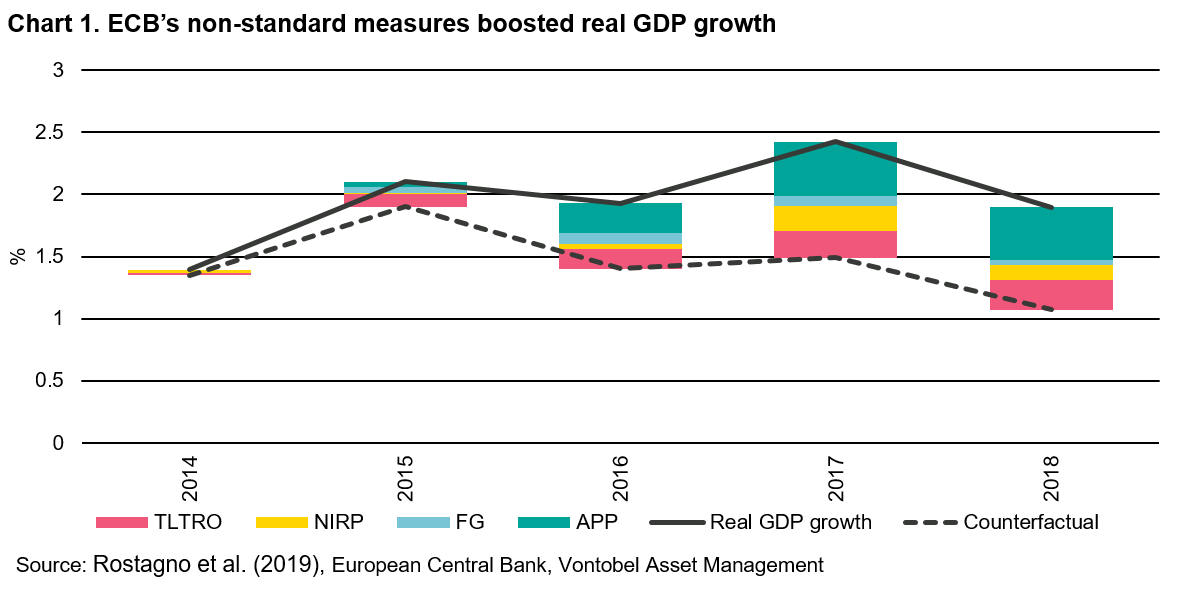 On average, these non-standard measures boosted growth by around 0.8% in both 2017 and 2018. Further, as stated by outgoing ECB President Mario Draghi at Sintra, with the absence of improvements such as the sustained return of inflation, additional stimulus is justified, given their past experience.

The new QE is good for bond investors

Last Thursday, the ECB cut rates on the deposit facility by 10 basis points to -0.5%. Markets focused on the cut as a sign of a slowing economy. However, the cut was necessary as the ECB would not have been able to re-start asset purchases without a rate cut.

In our view, the most important leg of the package is the asset purchasing programme (APP), and the “tiering” of the deposit rate on the minimum reserve requirements (MRR) for banks. Now, the ECB will implement a multiple of six to the current MRR, meaning that six times a bank’s MRR will be exempt from negative rates. As a result, banks won’t have to pay negative interest rates on a larger volume of deposits with the ECB – estimated at just under 50% of their excess liquidity. This is supportive of banks, as it will cushion the impact of negative rates. In addition, the banks will benefit from a longer TLTRO III tenor, at even more advantageous rates – the ECB has agreed to scrap their 10 bps margin, which should improve the take-up. 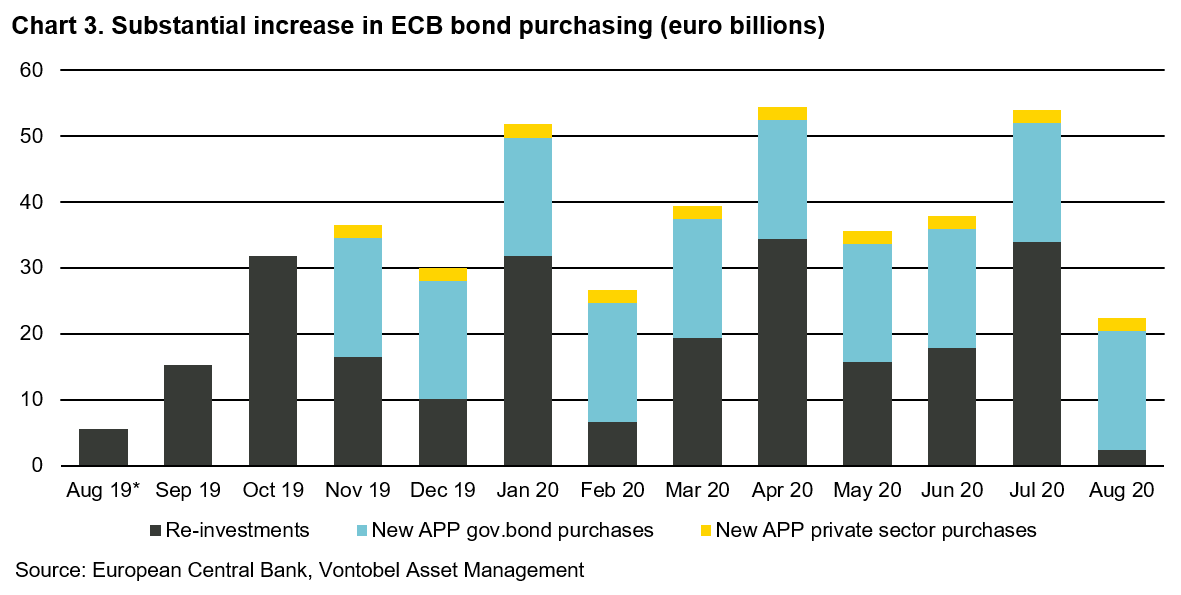 As things stand, the ECB can go on for quite a long time with the APP – about a year by our count – without changing their 33% ceiling on any single bond. If the ECB is compelled to go on for longer, which is what we forecast, it will do what is necessary to fulfill its promises and show that it still has ammunition left in its armory.

We stress the supportive nature of this package, since former purchases helped the economy as highlighted above, and as it is linked to the GC rates guidance. They see rates staying at present or lower levels until inflation converges robustly to a level sufficiently close to 2%. The newly announced APP would only end when the ECB begins raising its key interest rate. This seems far away at this stage.

In all, while many commentators have criticized Mr. Draghi recently, we are of the view that he remains pragmatic and prudent, doing the heavy lifting to sustain the currently feeble cycle. These new measures should be supportive of our mid-yield sector, where we see investors increasingly heading to in search of even a modicum of yield. In our view, the mid-yield area is where investors ought to be positioned and we feel this environment is fruitful for active investors with good credit picking abilities, and especially in the BB-rating bucket of the credit-rating scale where opportunities abound.

The lower for longer regime should be with us for some time and Ms. Christine Lagarde’s term should be as exciting as Mr. Draghi’s, as she also strives to ensure sustained prosperity. During a recent speech, Ms. Lagarde re-iterated that the banking union and capital markets union in the euro area should be high on the list of issues to address. The notion of a European Safe Asset* for instance, should equally be supportive, and extremely positive for the broader European bond markets and especially bank bonds. We look forward to her tenure at the ECB.

*A European Safe Asset is currently being contemplated by Philip Lane. It would represent a securitization of European government bonds and would be beneficial for the liquidity of European banks.