Currently, the Chinese market is giving its investors a difficult time. The reason for this is the Chinese government’s new regulatory move, which has impacted both large tech and private tutoring and educational software companies in recent weeks. Many foreign investors see these measures as an unexpected shock to the market and fear this increased regulation could spread to other sectors, triggering a systemic sell-off. Meanwhile, the Chinese government assured investors last week that the regulations do not threaten the market but are in line with the country's long-term growth plan. In view of this plan and Beijing's approach, the long-term growth prospects of the Chinese market could remain attractive. However, investors need to keep a cool head and maintain a well-diversified portfolio to navigate the volatile market environment.

Recent Chinese government regulations are increasingly targeting large Chinese tech companies. The allegations range from data security to cybersecurity to unfair competition practices, as evidenced by the crackdown on ride-hailing company Didi Global beginning of july after its IPO. As a result, investor sentiment towards US-listed Chinese internet companies, which are at the center of the geopolitical conflict between China and the US, turned negative and left a dent in the market.

In addition, Beijing launched unprecedented regulations on the private education industry last week. As a result, private educational institutions have been banned from making profits or raising funds through IPOs. Meanwhile, the Chinese government has also imposed stricter regulations on the real estate industry and announced plans to clean up the overheated property market. Investors currently fear that the crackdown could be extended to other industries. This regulatory uncertainty has led to a sell-off in the Chinese market over the past few days.

Data on northbound trade flows (aggregated transactions via the Shanghai-Hong Kong and Shenzhen-Hong Kong exchange link) show that this sell-off already seems to be calming down (Figure 1). In addition, interest in market entry is increasing due to low valuations. Meanwhile, the MSCI China Index recovered 3.36% on 28/07 from a three-day slump of -13.6%, and the Hang Seng Index also showed a 1.54% improvement from a three-day loss of -9.5%. 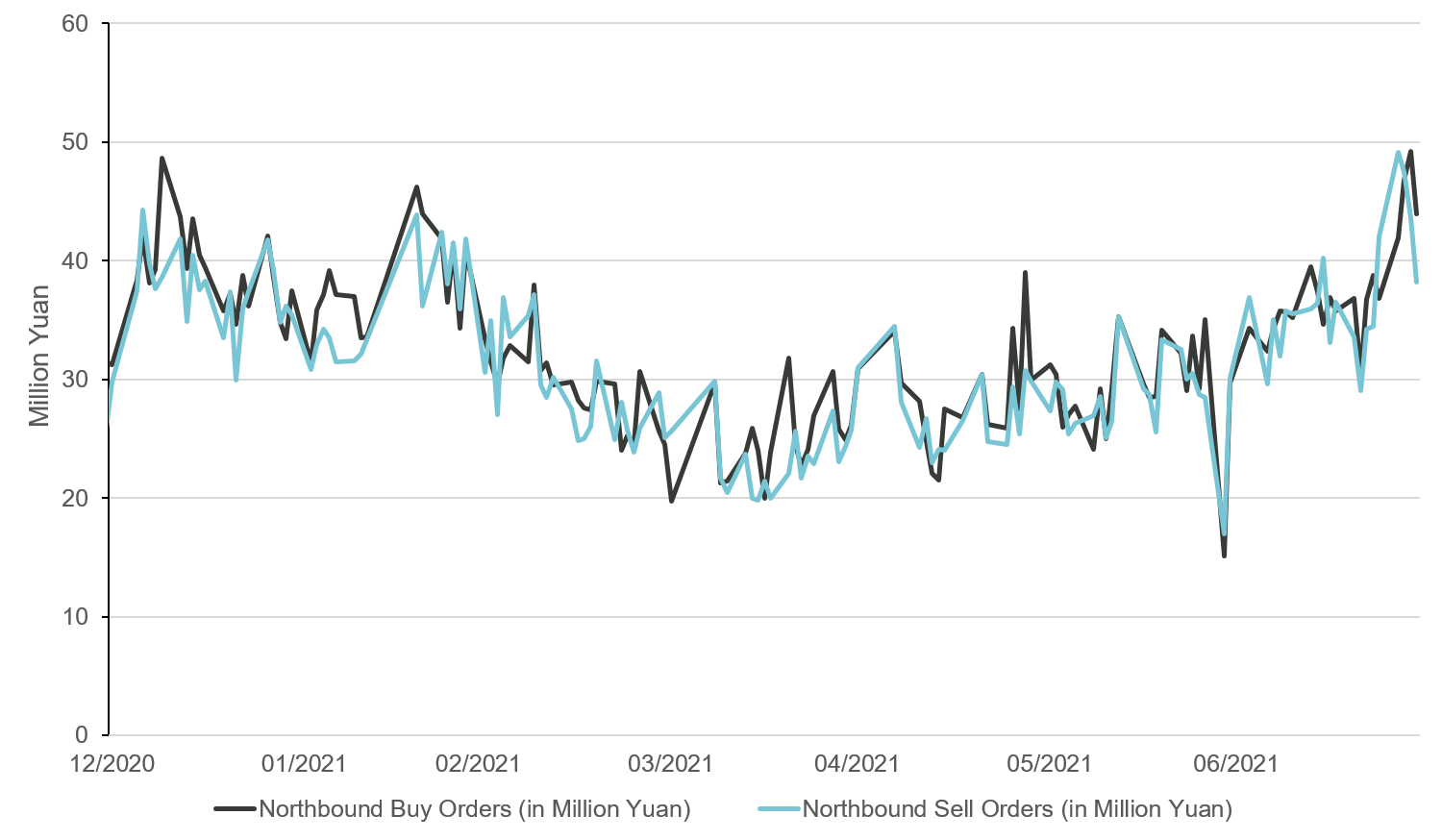 It’s not the first time that the government’s regulation spiked investors’ nerves, as demonstrated by the anti-corruption campaign in 2013 and the tax hike on luxury goods in 2018. At the time, both had negatively impacted the price of the spirits industry, which is led by Kweichow Moutai, the company with the largest market capitalization in China. Nevertheless, investors with a long-term horizon benefited as Kweichow Moutai posted an outstanding cumulative return of more than 400% in the last 5 years.

The current interventions in the market are led by the long-term plan for the country's growth that the Chinese government is pursuing. The 14th Five-Year Plan is a response to the demographic change in the country and points the way for China's political and economic future (Figure 2). It was adopted in March of this year and will be valid until 2025. The cornerstones are the generally formulated macroeconomic development goals, which form the basis for further measures and regulations. 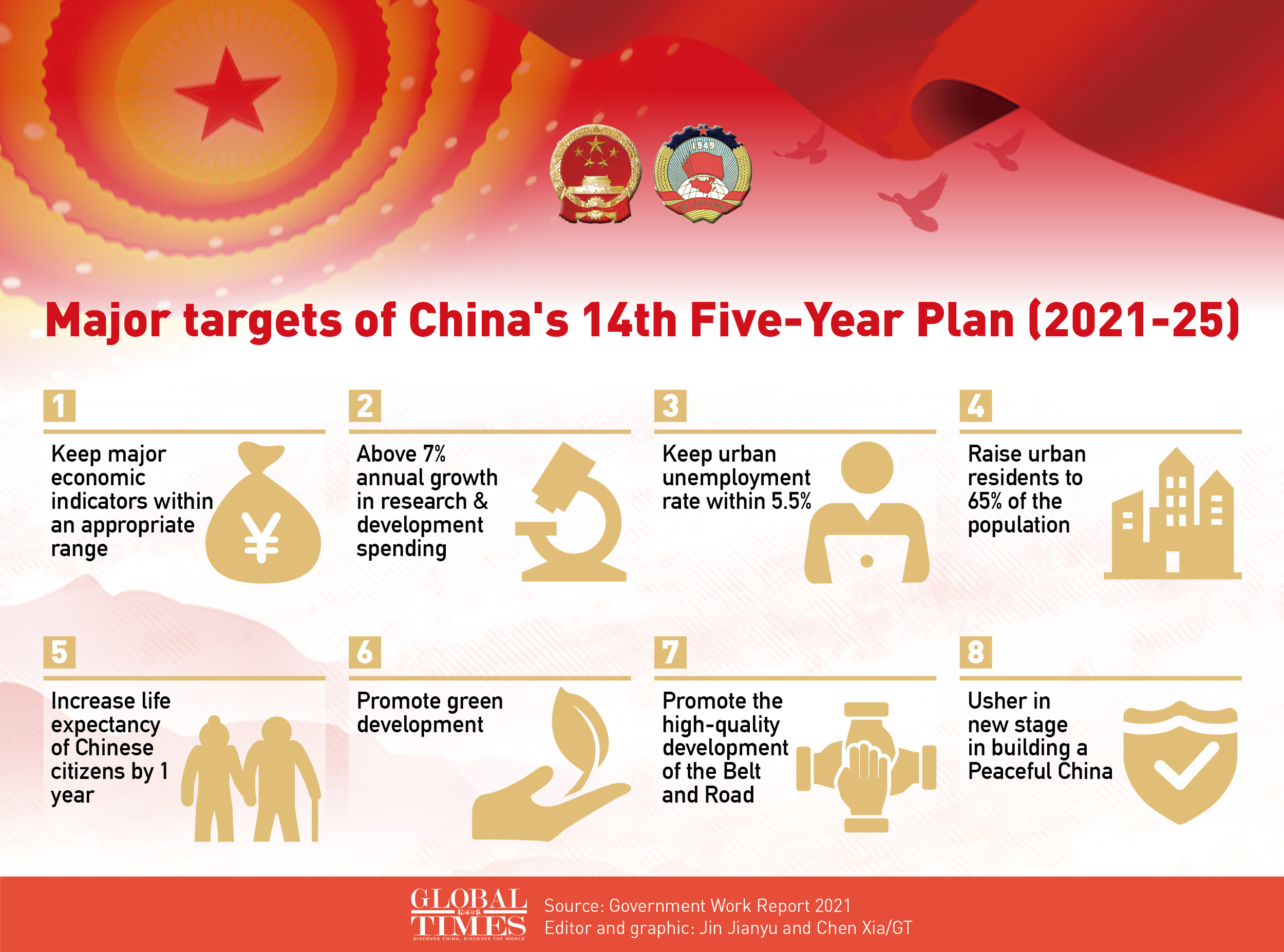 
Focusing on the quality of economic growth, Chinese leadership is striving to reform the industrial development agenda from service-oriented to self-reliant, high-tech and quality production. To this end, the authorities are continuously increasing investments in the high-tech sector, most recently by 37.3% year-on-year in the first quarter of 2021. Regulations for large technology companies have now been set to create a better market environment for the growth of medium and small enterprises. This also aims to help create a healthy digital ecosystem.

As also stated in the five-year plan, the government promises to improve the quality of life for its citizens. The move to regulate education aims to reduce the financial burden on families from the lower strata of society and promote access to education more broadly, rather than targeting only the elite. It’s also a response to the current overpriced education system which, as a consequence, leads to fewer opportunities for education in the lower classes and a decline in birth rates.

Is the market still attractive?

Although the Chinese government's measures are in line with its long-term development plan, investors' different interpretations and speculations around the headlines have led to fierce market reactions. However, from experience, these could be of short-term nature, as the trade war with the US in 2019 shows. But it cannot be denied that new regulations of the internet giants did have a negative impact on investments.

Passive investing could be disadvantageous in the current environment as several popular Chinese market indices followed by the major ETFs have a high allocation to the large technology companies (Figure 3). Thus, MSCI China Index has a 36% weight to the large internet companies, Hang Seng Index has a 21% weight to those companies as of 27.07.2021. 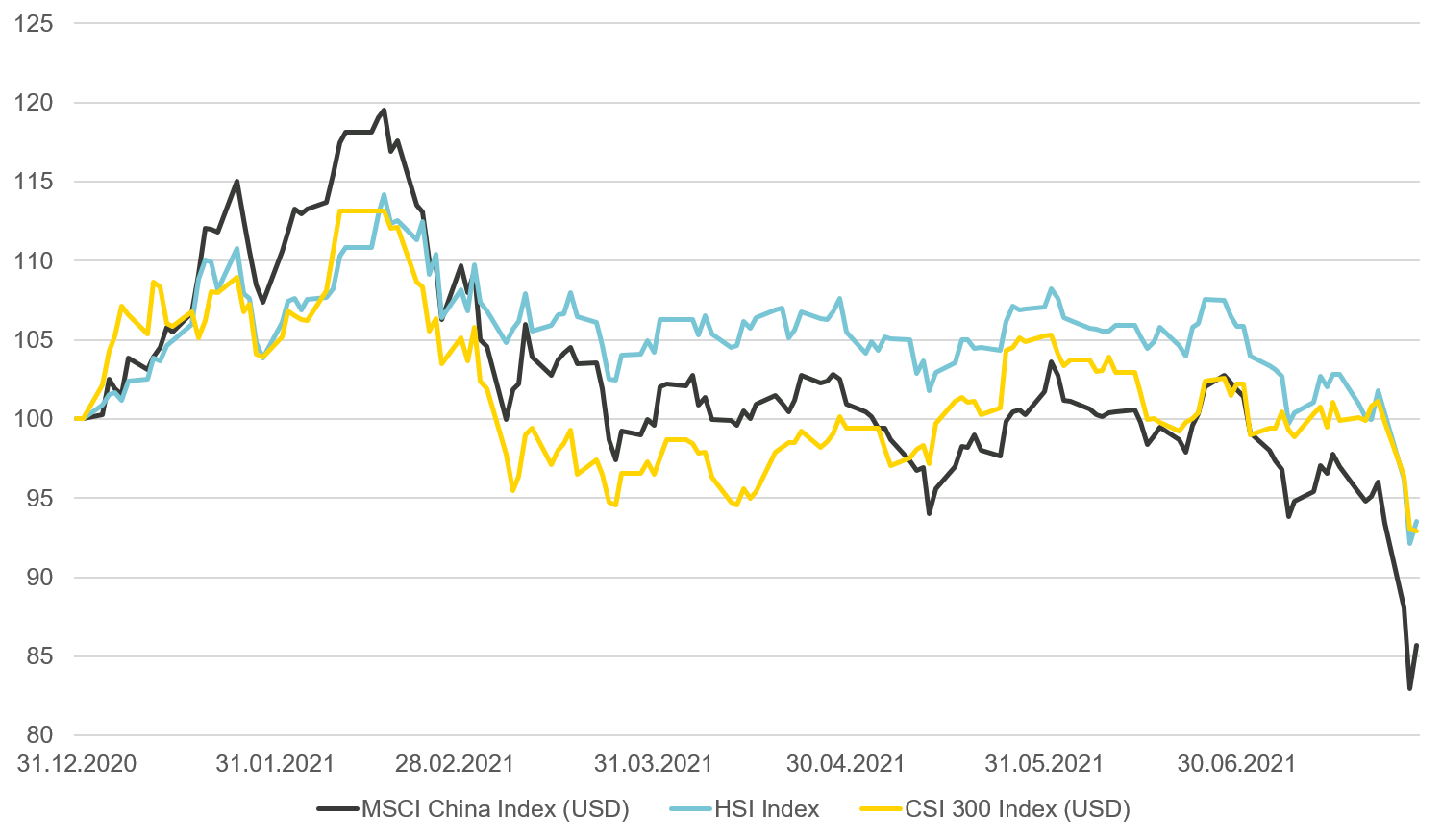 
Given the developments in recent weeks, the question arises whether the Chinese market is still attractive. Even though regulatory interventions and high volatility are not uncommon, a strong macroeconomic environment, solid company fundamentals and the Chinese government’s 14th Five-Year Plan could argue for an investment in the Chinese realm.

A look at the numbers shows that the macroeconomic environment currently remains positive as the central bank continues to increase liquidity. Annual GDP growth has already surpassed pre-pandemic levels and is recovering faster than the US and the Eurozone (Figure 4). 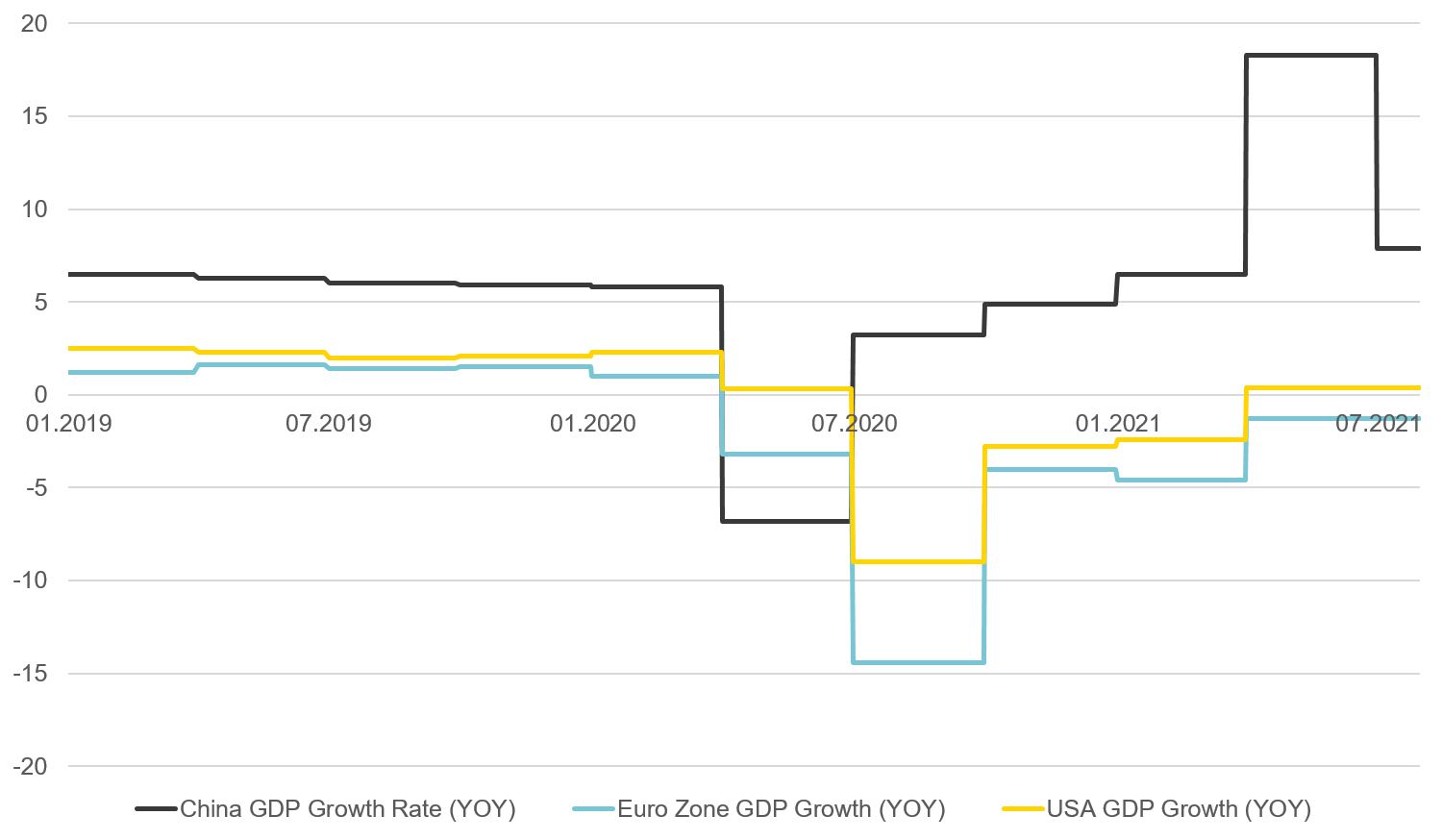 
Although investment opportunities in China may be attractive at the moment, investors need to proceed with caution. The market is known for its high volatility. This applies in particular to the A-share market, 85% of which is used by local retail investors. These tend to have a shorter investment horizon and, from experience, trade more frequently. The increased volatility is a result of the herd behaviour of small investors who chase profits in an up market and panic sell in a down market. 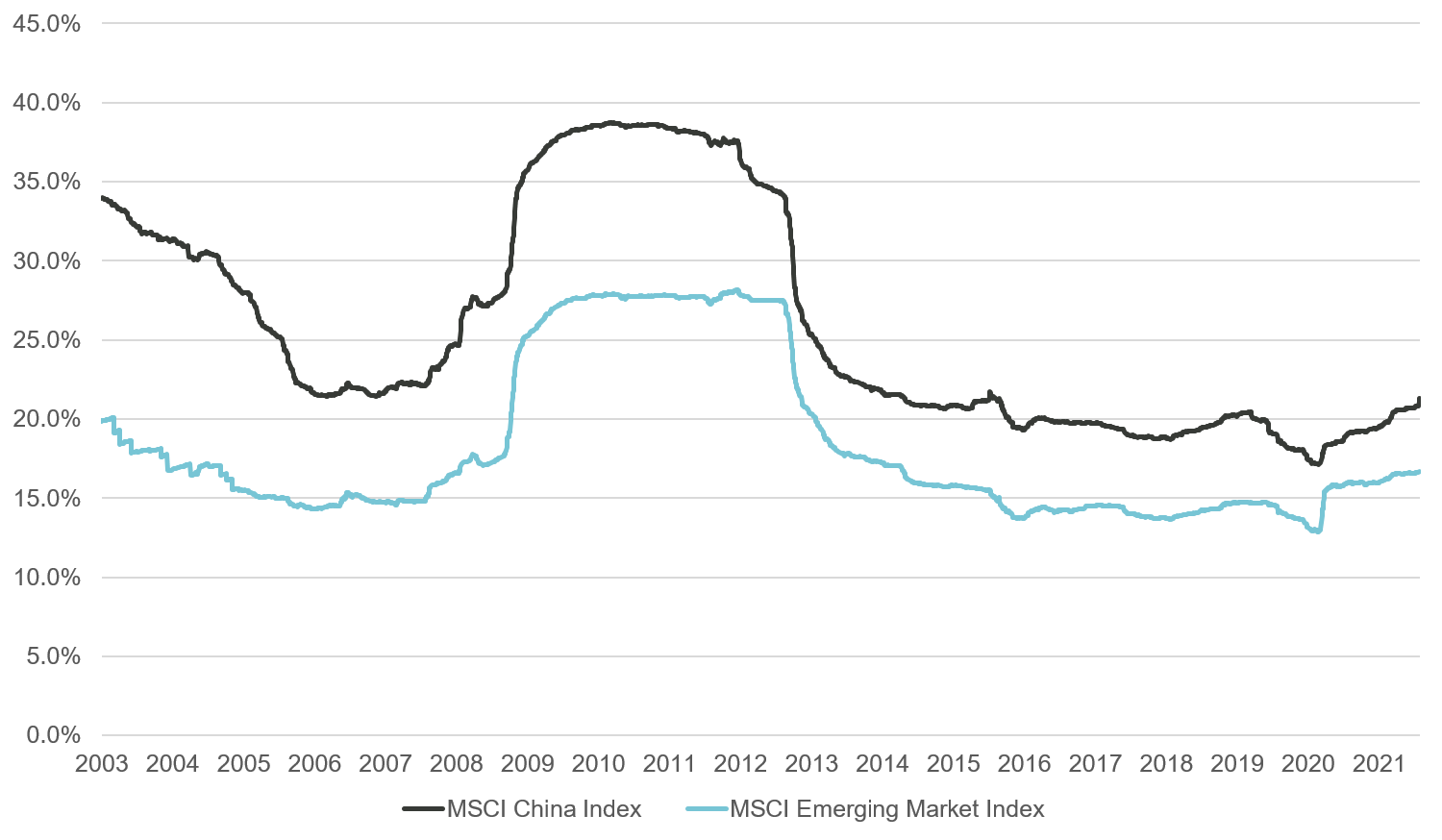 
There is some evidence to suggest that market volatility could decline in the future. This is not least because the Chinese government has accelerated the participation of social security funds in the stock market. This could result in not only domestic but also foreign institutional investors gradually entering the market, making it more efficient. As these investors often invest for the long term, market volatility could reduce over time.

How to invest in the Chinese Market

Despite the high volatility and government regulation, which follows a long-term plan, the Chinese market could offer investors attractive opportunities. Market risks should be addressed with more diversified portfolios that include different investment themes and sectors. In this context, active management could help to identify winners, exploit inefficiencies, and thus generate added value for investors. Given the interventions, investors should take a long-term perspective to avoid the regulatory risks and "ride out" the market fluctuations. Overall, it takes a steady hand and patience to catch the right entry points in the Chinese market. 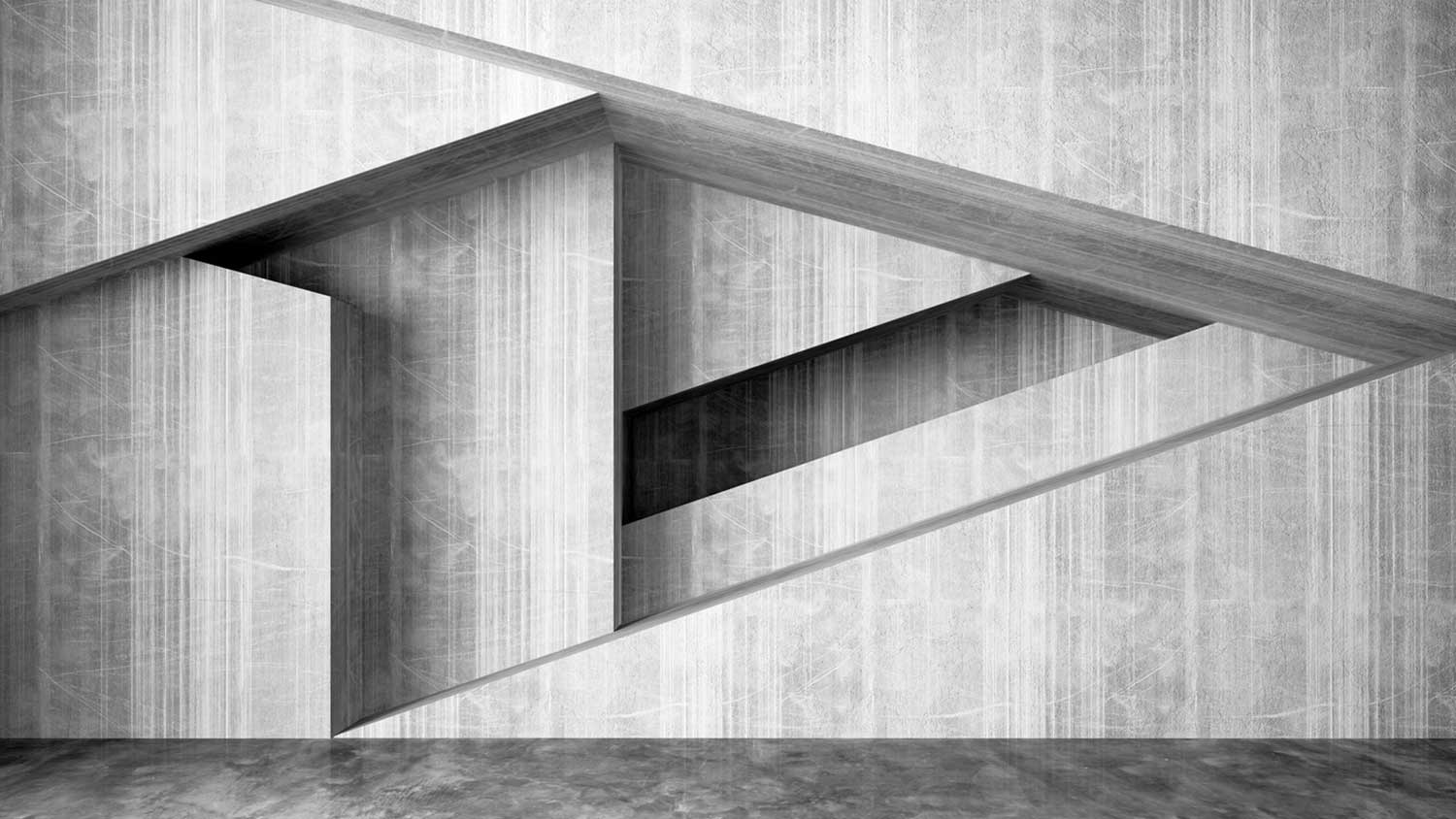