Inflation remains the number one concern for investors. Indeed, inflation hurts (real) income, hence growth, and strongly influences monetary policy. Individual countries’ dynamics differ, despite being all under the same price pressure. Particularly, central banks in many emerging market countries had to "promise" more energetic tightening moves than most developed markets because of their lower credibility in anchoring inflation.

The consensus expectation is that price increases will decelerate from 1Q22 onwards, due to base effects from energy prices, but also due to lower transport, inputs and, more generally, reductions in supply side bottlenecks. In this respect, for example, the automotive sector is currently re-accelerating its production due to a greater availability of electronic components.

Speaking about numbers, the consensus expectation for US headline inflation at the end of 2022 is just over 2.5%, down from 6.8% currently. The strongest decline is expected in 2Q22. In the eurozone, the same phenomenon is expected to occur, with inflation falling over the same period from 4.6% currently to 1.3%. The same is true for the developed world as a whole, as well as a number of emerging countries in Asia and Central Europe. Therefore, it appears that we have reached the inflationary mountain pass, and the peak is probably behind us.

This type of deceleration, which is the market consensus, should relieve household incomes and prop up consumption, and therefore support growth.

With steady demand, one can count on robust growth and, therefore, a low level of defaults. In this context, it seems favorable to remain invested in high carry. Growth above the historical average (see chart 1 below), combined with decelerating inflation, should also be accompanied by a steepening of yield curves from current levels, with increases likely at the long end of the curve. The markets will remain sensitive to any new shocks, in growth or prices, and flexibility therefore remains imperative.

So much for the opportunities offered by the growth component of disinflation. Could inflation dynamics offer more opportunities? Especially in relation to central banks and expectations of rate hikes. Asked differently, have expectations overreacted and anticipated too much monetary tightening?

Since recent history has consisted of a succession of upside surprises (see chart 2), it is reasonable to assume that an overreaction of expectations and prices has occurred, due to the entropy of the crowd, a self-fulfilling dynamic supported by mirroring expectations, surprises, and hard data. As long as expectations are not surprised in the opposite direction, the consensual dynamic continues, the crowd is right, and so are all the individuals who constitute it at that moment. 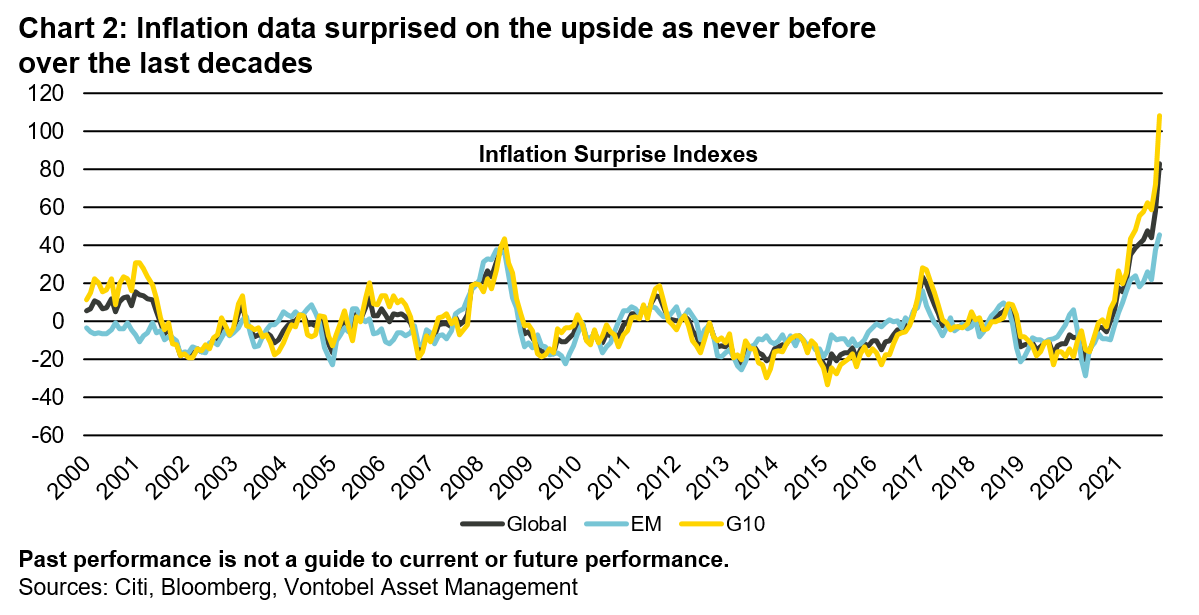 Similarly, and this is what we expect, the opposite phenomenon may occur: a series of downside surprises, confirmed by the deceleration of price increases. The investment windows would then be widened to include other assets and countries. Which ones? Those where the impact on CPI of rising commodity prices has been strongest, the ones most hit by supply constraints, or where central banks have had to aggressively raise rates to reassure investors about their determination to anchor inflation expectations. For example, emerging market debt in local currency, especially the short end, in countries like Brazil, Colombia or Russia. In those countries, if indeed inflation expectations prove to be well anchored by the repeated rate hikes by central banks, the two-to-five-year year segments will look particularly cheap. In the developed countries, we would favor relative-value investments on the yield curves. 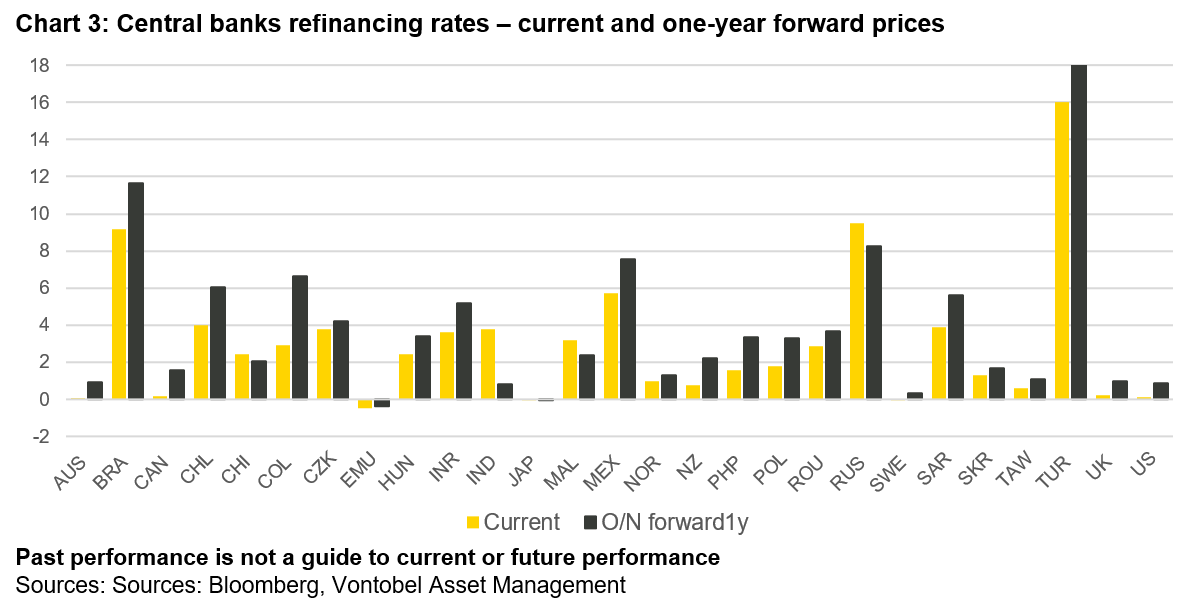 The strength of second round effects, which may vary from country to country, will be critical for this second type of investment. To what extent will a further rise in core prices offset the above-mentioned base effects? Demographics argue for some continued tightness in labor markets, and the energy transition will have a cost, in a context of halted globalization and heightened geopolitical tensions – i.e. less substitutability of production factors. If the core elements grow only gradually, the probability of a spiral of downside surprises on CPI over the next months is high. By the way, producer prices already started to decelerate in various countries.

Be ready, be agile

The coming disinflation will strengthen real growth. Given healthy corporate balance sheets, exposure to high spreads therefore makes sense. But other opportunities may arise if, after months of upward inflation surprises, the self-reinforcing spiral ends and it turns out that markets have indeed overreacted in a number of cases: for example, emerging market debt in local currencies, especially in the high-yield segment, but also the curves in developed countries, which would steepen more than in the first scenario. From now on, watch out for surprises in prices rather than the level itself. And stay agile!