We tend to focus on noisy news rather than on well-known long-term major trends. Investment decisions are no different. This psychological phenomenon, described by the Nobel Prize winner Daniel Kahneman in his "Thinking fast and slow" bestseller, is referred to as the "recency bias". If you keep that in mind, volatility caused by short-term market reactions can create opportunities to enter long-term investment opportunities at a depressed stage.

China is one of the areas where a strong long-term investment case exists and news about recent events, such as trade tensions with the US and new regulations, have been dominating media and investor attention. However, we believe there are five key reasons to consider China a land rich in compelling investment opportunities:

1. China (on the rise) as an economic superpower and the world’s growth engine

The World Bank described the pace of growth in China as the fastest sustained expansion by a major economy in history: China is the world’s 2nd largest economy and with its population of 1.4 billion people, China represents about 18 percent of humanity. Since China began to open up and reform its economy in 1978, GDP growth has averaged almost 10 percent a year, and more than 800 million people have been lifted out of poverty. Even after a recent slowdown, China’s economy is growing by 6 to 7% a year, which remains high by the standards of most middle-income economies. That’s about twice the growth rate of other large economies. As a result, China is expected to contribute more than 20% of the world’s economic growth over the next five-year period, according to an IMF forecast.

(As an interesting aside, China was already the world's largest economy in 1820, accounting for an estimated 32.9% of global GDP, according to a study by economist Angus Maddison. Foreign and civil wars, internal strife, ineffective governments, natural disasters (some of which were man-made), and distortive economic policies caused China's share of global GDP on a purchasing power parity (PPP) basis to shrink significantly.)

2. From a manufacturing champion to an innovative leader

Since opening up in 1978, China has become the world’s largest international trader of manufacturing goods and the second-largest trader in services (Source: WIPO), and consequently, the world champion in exports. Economic reforms and trade and investment liberalization have helped transform China into a major trading power. China’s exports soared by 17% annually in the past two decades in dollar terms. In total, Chinese merchandise exports rose from USD14 billion in 1979 to USD2.59 trillion in 2018. That’s an increase by a factor of 185. Merchandise imports grew from USD18 billion to USD2.1 trillion (x116.6). The value of China's manufacturing on a gross value-added basis was 49.2% higher than the U.S. level in 2016.

But the story continues, China’s next transformation is well under way. Services have already taken over manufacturing as the largest share of GDP and are now the largest contributor to GDP growth. In addition, China has managed to reinvent its economic profile from a manufacturer to an innovation leader with a strong focus on new technologies. China and its corporates are among the leaders in future industries like e-commerce, artificial intelligence, fintech, high-speed trains, renewable energy, electric cars, 5G, Blockchain, and solar energy. As a result, China was also the biggest source of applications for international patents in the world in 2020 for the second consecutive year after leaving the U.S. behind in 2019 and extended its lead in 2020. China filed 68,720 applications while the U.S. filed 59,230. The rate of increase was higher for China with a 16.1% year-on-year increase versus 3% for the U.S. China first knocked the US from the top spot in 2019. China’s R&D spending in total accounts for around 20 percent of the world’s total. Therefore, investing in China provides access to the leaders in technologies shaping the world of tomorrow.

How was that possible? Several factors are supporting this trend: With its 1.4 billion citizens, China has a huge domestic market that provides technology innovators plenty of room to grow to a critical size. China’s government has a strong willingness to support its growth engines and has the authority to shape industrial policy and provide infrastructure to achieve this. In addition, global projects like the belt and road initiative have opened many doors to gain market share in Asia and EMEA. In our view, these are very positive conditions to allow innovative business leaders to emerge and grow.

Since opening the economy for foreign trade in 1978, China has been very successful in boosting its exports as the main catalyst for its growth. This was a great success story, but it also has exposed China to the vulnerabilities inherent in international trade integration. Therefore, China's so-called dual circulation strategy places now a greater focus on the domestic market, or internal circulation, in order to be less dependent on an increasingly less supportive world economy and foreign policies of other countries. As a main engine of this strategy, China has just entered its 14th Five Year Plan of targeted investments to support its domestic growth, aiming at increasing consumption to support China’s economic development.

The dual circulation strategy reflects China`s long-standing ambition to become more self-sufficient and involves developing its huge domestic market of 1.4 billion consumers as a main driver of growth, steadily increasing the share of the population belonging to the middle class with sufficient wealth to increase consumption. Since 2006, China managed to add an average of 60 million people to its middle class every year. To illustrate the magnitude of this growth, it is roughly the same as the number of people living in Italy. In relative terms, China is experiencing the fastest expansion of the middle class the world has ever seen. According to recent projections, about 1.2 billion Chinese people will be in the middle class by 2027, making up one quarter of the world total. This might further increase investor`s confidence in China`s economic strength and its ability to continue the growth story with a new catalyst.

4. Increasing demand for Chinese stocks around the corner

For equity investors, another relevant factor for an investment decision is valuation and other indicators about future supply and demand of the respective stocks. In this regard, there are several promising facts investors should know: In 2020, China’s share of global GDP was about 18%, while its share of global equity capitalization was only about 12%, even before the drop in 2021. Considering China’s significant growth, this doesn’t suggest that China’s equity market is overly expensive. In addition, equities appear under-owned by Chinese households (8%) vs. equity ownership in developed economies (US 25 percent). And China is currently also “under-owned” by foreign investors, as they hold just 3% of the broad market in China. Further demand might come from investment strategies guided by market indices: The MSCI inclusion factor for Chinese equities should grow from the current 20 to 100% in 2026*. This alone could lead to inflows of up to USD 240 billion as a significant source of demand in equities. If you take these factors altogether, the perspectives for increasing demand in Chinese equities seem to be quite promising.

Many investors still perceive Chinese A-share stocks as a rather risky part of their overall portfolio. But as a building block of a well-diversified portfolio, they can even reduce the overall risk. This is because China’s A-Shares have a low correlation with international stock markets and high-return dispersion, which makes the asset class attractive to diversify the portfolio without diluting the average returns. In addition, the China A universe of stocks is a broad segment covering many industries and individual firms, hence offering broader diversification at an industry sector level than can be gained via the stocks listed in Hong Kong. It even offers access to unique sectors.

China on a rollercoaster

In 2021, Chinese equities have been fairly volatile due to a series of recent market events which caught investors by surprise. It feels a bit like being on a rollercoaster at times. While it is always a good idea to keep an eye on the long-term impact of such events, we think the underlying opportunity for China is still intact. China is an economic giant with rising consumption, a leading manufacturer, has a growing reach across the globe, and hosts many innovative leaders in new technologies. In addition, Chinese equities are under-owned both by domestic and foreign shareholders. In hindsight, phases of market volatility often turn out to be a time to enter such opportunities at a discount. Remember, the time to step onto a roller coaster is when the train is on the ground, just after it has taken a steep drop from on high. 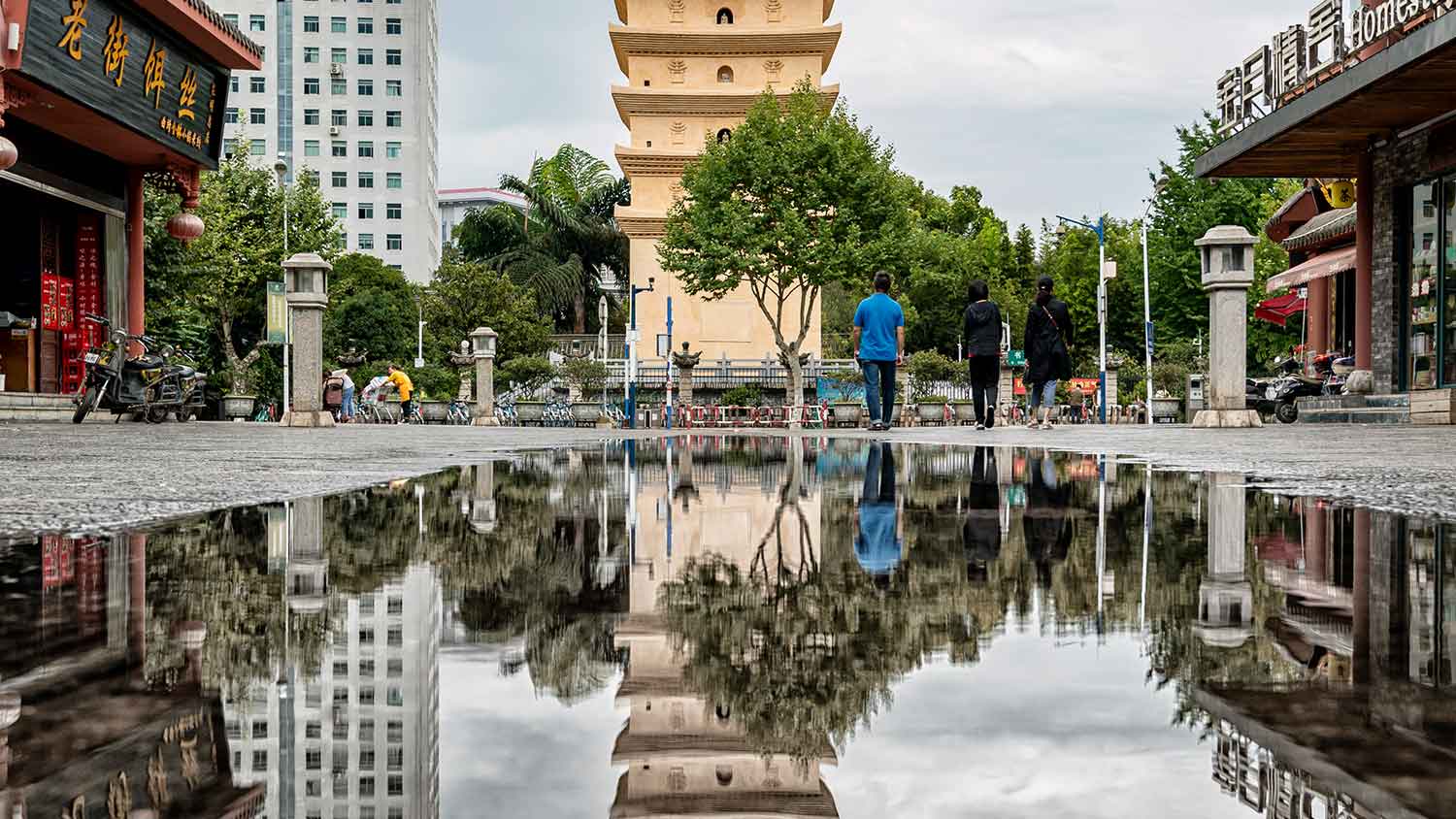