Is China’s slowdown a concern for the global economy?

China’s economy is decelerating, with GDP growth likely to be significantly slower in Q4 2021 than the already subdued 4.9% year-on-year seen in the previous quarter. Tighter regulations and credit conditions imposed on real state firms since August 2020 in an attempt to reduce excessive leverage in the sector are driving this slowdown (see Evergrande: not to big to fail for more details on this topic). The crackdown on the IT and education sector this year have also contributed to a deterioration in the investment sentiment. House prices have been declining since September, increasing concerns about a prolonged Chinese deceleration and its consequences for the global economy. It’s difficult not to worry because China is the second-largest economy in the world and the largest among EMs, but there are good reasons to believe it will be manageable.

China’s real estate sector doesn’t work like a market economy, meaning that a real estate crisis in China is unlikely to be as bad as in the US and Spain after the global financial crisis. The public sector controls the supply of land and influences the supply and pricing of housing. Home purchases and sales are strictly regulated, and households are not overly leveraged as mortgages typically require ~30% down payment and much more for second homes. Moreover, the self-inflicted nature of the slowdown means that the government can ease credit policies if it feels that the economic cost of reducing moral hazard in the real estate sector is becoming too high. We have already seen evidence of policy easing and more is likely to come suggesting that the economy will bottom out in Q1 2022. China’s 2014-15 real estate driven slowdown is a much better comparison than the sub-prime crisis and even then, several factors suggest it won’t be as bad. 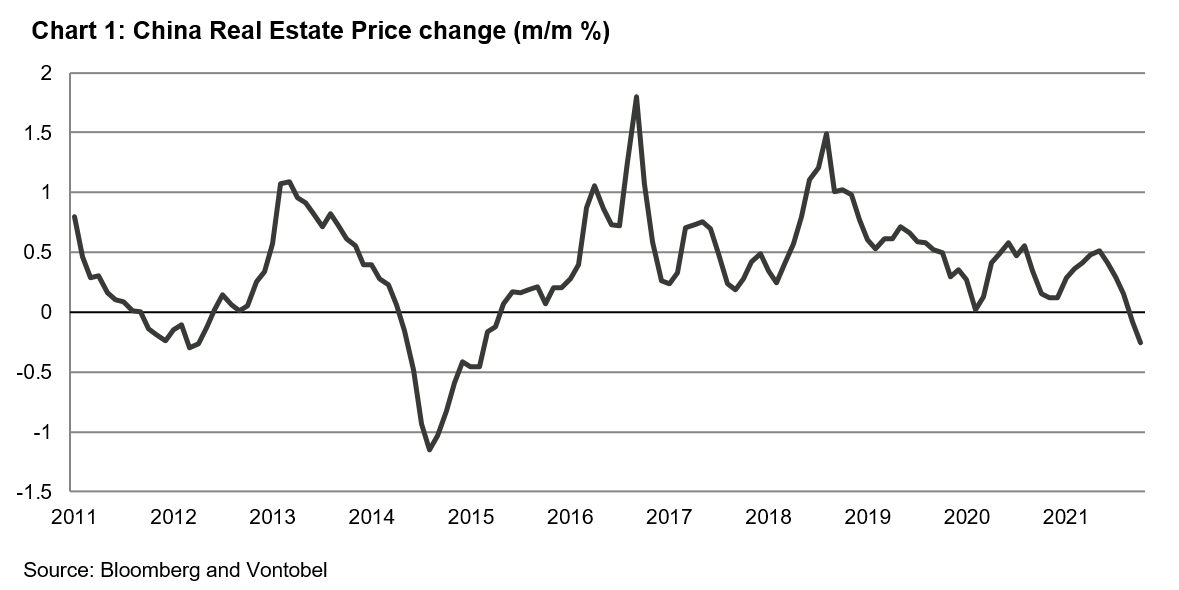 The global economy is in a much better cyclical position today to face China’s slowdown.

Back in 2014-16, the eurozone economy suffered from a double-digit unemployment rate as it was only starting to come out of its debt crisis. US growth was also subdued and commodity prices had just collapsed, leading to fears of deflation in most of the advanced world. Today’s global economy looks different: growth may be slowing down but is expected to remain above potential in most countries, inflation is above target in most regions, and commodity prices remain high following several years of global underinvestment in extractive sectors. The latest data for Asian exports confirmed that rapid growth elsewhere is indeed compensating for China’s slowdown. Finally, today, China’s real estate stock stands at a not-too-high level of 22 months of sales, whereas in October 2015 it was quite high, peaking at 31 months of sales. This implies that a much shorter period of low real estate investment will be sufficient to balance the market in 2022.

A tapering without a tantrum

The Fed is tapering its asset purchases and the evidence so far indicates that this will be a tapering without a tantrum. Why? It's all about the right communication. Unlike in 2013, the tapering has been well-communicated through 2021 and it's fully priced in, so there should be few surprises going forward. In late November, the market had already priced in three rate hikes by February 2023, basically one 25 basis point hike per quarter starting in mid-2022, right after tapering is done. One hike per quarter leaves no room for any negative economic surprises that would lead to a slower tightening. The pandemic is not yet over, as shown by the emergence of yet another new variant. Therefore, we believe there’s a good chance that the Fed will need to hike at a slower pace. There is of course the risk that high inflation could prove to be more persistent in 2022, but we see this as a risk to monitor rather than our baseline.

Developed market central banks are starting to withdraw their monetary stimulus but global financial conditions should remain quite accommodative for some time. The Fed’s tapering only means reducing asset purchases. Therefore, the Fed will continue to ease through asset purchases but at a slower pace every month. Real interest rates in the developed world are likely to increase through 2022 as inflation decelerates and rate hikes commence, yet we will probably have to wait until late 2022 or 2023 to see US Treasury real yields on positive territory. Meanwhile, EM central banks are hiking at a much faster pace, thus increasing the interest rate differential in favor of EM debt.

In January, we said 2021 would be the year of EM HY outperformance on the expectation that HY spreads would tighten vs IG. This was the case during the first half of the year, but HY has underperformed since late August when investors started to become more risk averse on the back of multiple factors: the emergence of new coronavirus variants, then persistently high inflation, lower growth expectations, and defaults in the China real estate sector. Despite the setback of the last three months, HY has still done better year-to-date in both the EM sovereign and corporate space. However, returns have been rather disappointing at the benchmark level with the EM sovereign HY subindex returning -2.0% versus -2.1% for the IG subcomponent. For EM corporates, returns have been better with the HY subcomponent delivering 1.5% returns vs 0.2% by the IG subindex (as of December 3).

It’s difficult to pinpoint when the sentiment towards HY will improve but there are good reasons to believe that it will be sooner rather than later. First, EM HY spreads are significantly above their average levels (see chart 3) while US HY and EM IG spreads are near historical lows. Contrary to what some markets price in, the global economy is not yet in a typical late cycle dynamic, in which central banks “push” the economy into recession by hiking rates and tightening monetary conditions. On the contrary, we expect global growth to remain well above potential through 2022, despite the ongoing deceleration from a very high level in 21Q2 toward levels closer to potential growth. In addition, inflation will probably converge to rhythms closer to central banks targets. In brief, the risk of too tight global financial conditions that would make it difficult for HY issuers to refinance appears low for now, and the quarters to come.

Default worries are also weighing on HY sovereigns as global monetary policy will gradually become less accommodative. While these worries are legitimate for sovereigns in deeply distressed countries like Sri Lanka and Ethiopia, we think they’re overdone when thinking about the broader HY space, of which these two sovereigns are but a tiny fraction. In our view, the bulk of Covid-related defaults are now behind us. Defaults typically increase in the early stages of a crisis because restructuring allows issuers to postpone their debt repayments until their revenues have recovered. We’re now at a late stage of the recovery when revenues have already recovered substantially (and in some cases fully), and defaults are typically low in this stage of the cycle. Lastly, one potential trigger for increased risk appetite is the very likely deceleration of inflation in H1 2022, which should re-assure investors that global financial conditions will probably remain loose, even if less accommodative than today.

From a top-down perspective, EM corporate debt remains well positioned to deliver positive returns in an environment of rising yields given the shorter duration of its benchmark (4.63 years) when compared to that hard-currency sovereign benchmark (7.91 years). Shorter duration implies a lower price sensitivity to interest rates, which partly explains the EM corporate outperformance vs hard-currency sovereign debt year to date (+0.7% vs -2.7%).

The elephant in the room for the EM corporate outlook is the Chinese real estate sector, which has fallen by almost 25% since late May. After such a sell-off, the issue is no longer whether we will see many additional defaults in the sector, indeed, they’re probable. The issue here is that there are several sound real estate firms whose bonds are trading in distress that are unlikely to default. And in many other cases, bonds are trading at prices that are below expected recovery values due to forced selling. Thus, we find that China’s real estate sector presents opportunities to active investors who have sufficient resources to assess the likelihood of default and estimated recovery values of each individual firm.

EM local currency debt has had a terrible 2021. The EM local benchmark (GBI-EM GD) has lost 10% year-to-date battered by a strengthening dollar and EM central banks hiking rates, in some cases aggressively, to combat inflation. Stars are slowly aligning to bring about a change of fortune for the asset class in 2022. The time hasn’t arrived just yet, but we think it’s a matter of a few months. Here’s why. First, EM central banks are ahead of the curve in removing their monetary stimuli. The Fed is expected to start hiking rates in H2 2022, but most EM central banks have been doing so for several months now. Second, inflation has been higher and more persistent than expected in 2021 in most EMs, but with commodity prices stabilizing, credit conditions tightening, and base effects fading, inflation is bound to decelerate through 2022, which will help bring real interest rates to more compelling levels across EMs. Third, the interest rate differential between EMs and the Fed is already the highest since mid-2017 and will increase further as EM central banks keep hiking rates in the next few months. We think it’s a matter of a few months until disinflation begins in earnest and EM central banks reach the end of their tightening cycle. As that moment approaches, the sentiment towards EM local debt is bound to shift for the better.

So, our outlook for 2022 is positive. Whilst we broadly agree with other market commentators on the key challenges the economy and thus EM FI sectors will face during the year, our view is that these will be manageable, and that there will be opportunities in each EM FI sector for active investors. Cheap valuations imply that once the uncertainty clears up, the recovery of emerging market fixed income assets will be quite substantial, particularly in the HY space.

The views and opinions herein are those of Vontobel and may change at any time and without notice. Such information is not intended to predict actual results and no assurances are given with respect thereto, Some of the information provided may contain projections or other forward-looking statements regarding future events or future financial performance of countries, markets and/or investments. These statements are only opinion and actual events or results may differ materially.  Vontobel reserves the right to make changes and corrections to the information and opinions expressed herein at any time, without notice.