Vladimir Lenin believed that “Soviet power plus the electrification of the whole country”1 would let communism triumph over capitalism. For his namesake in today’s Kremlin, turning off the gas tap is one way of letting the west feel his muscle. There are alternative gas sources, but swapping a warlike supplier for other, more reliable ones can’t be the end goal. The focus has shifted to technological solutions.

Unfortunately, the west has long been hooked on the gaseous stuff from Moscow. Germany, in particular, has been in love with the idea of promoting democratic values through close trade relations with Russia. European utility companies, lulled by the steady and increasing flow of Siberia-sourced energy, have been telling consumers that gas is the most eco-friendly option when it comes to fossil fuels, a view recently supported by the European Union. A plan presented by the European Commission earlier this year – shortly before Russia invaded Ukraine – earmarked natural gas for a “green power” label.2

There has been a rude awakening. Vladimir Putin is shutting off supplies to Poland and Bulgaria – for starters, it is to be feared. Europe, suddenly aware of the strings attached to the eastern power’s gas shipments, is now attempting to wriggle out of the Russian bear’s warm embrace.

Energy independence is a priority

Russian gas imports covered approximately 40 percent of European gas consumption in 2021. To replace them by 2030, the European Commission introduced several measures in its so-called “Repower EU” action plan aimed at gaining energy independence. Under this scheme, the 27-nation bloc will rely on some new pipeline-based imports from countries such as Norway, and more liquefied natural gas (LNG) from various regions. The small European nation of Lithuania has already weaned itself completely off Russian gas by building an LNG terminal in the Baltic Sea. Germany is planning four LNG platforms with one off the northern city of Hamburg possibly ready by the end of the year.3 But simply swapping one gas supplier for another won’t do the trick. Smart energy and efficiency solutions are even more important aspects of the Repower EU plan (see chart 1). 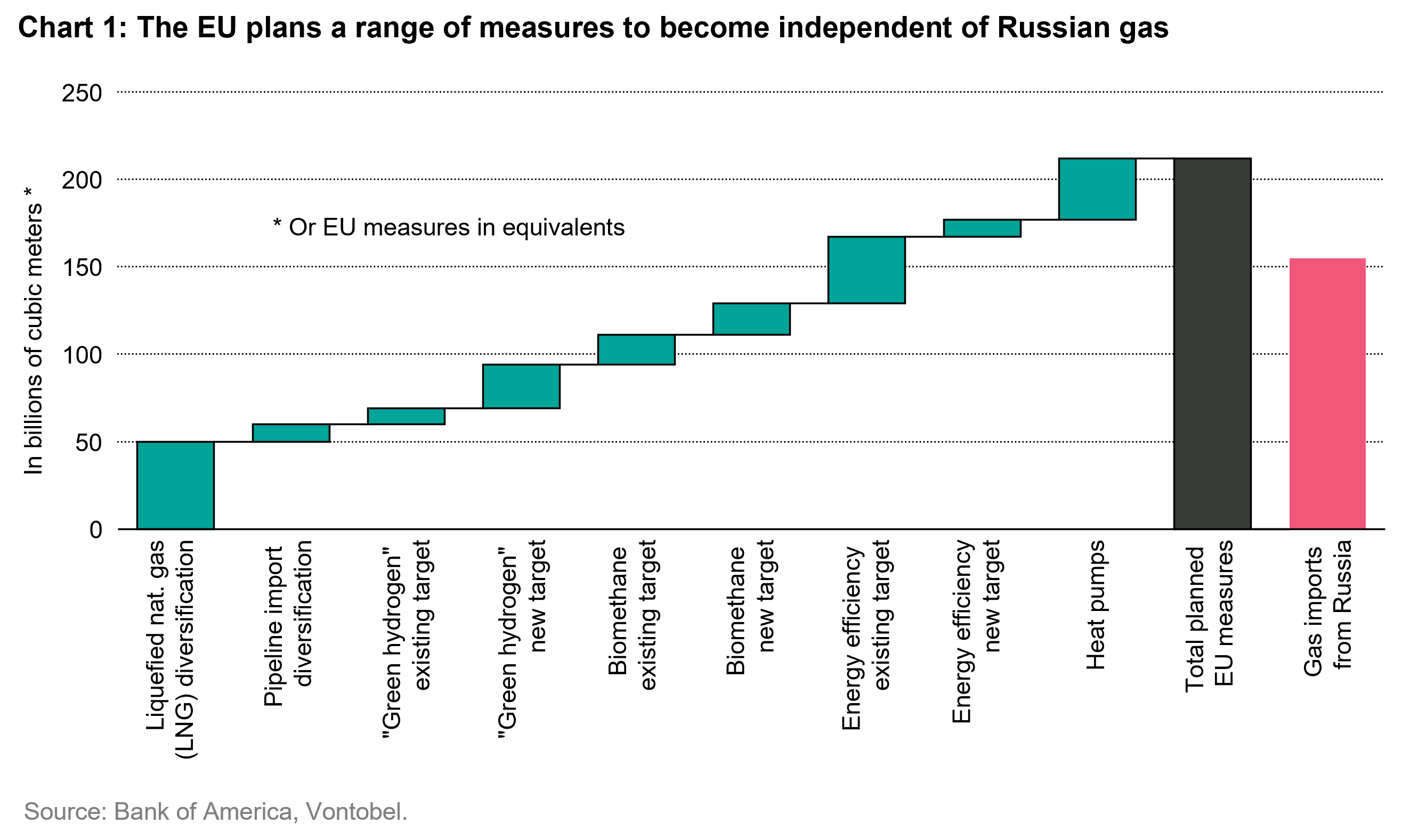 We believe that heat pumps in particular are a key technology for buildings, both from a net-zero emissions and a European energy security perspective. Such products that extract thermal energy from the air or the ground, reduce consumers’ gas consumption and consequently, carbon emissions. One of the companies we follow in this area is Sweden-based Nibe Industrier, a manufacturer of heat pumps and intelligent indoor climate control systems used in a variety of building types. The company's Climate Solutions division, of which heat pumps are a part, accounts for 74 percent of overall revenues.

While the company’s prospects seem bright under European energy plans and climate targets, there are uncertainties too. Much of its revenue generation in the heat pump sector depends on governments’ willingness to subsidize installation in private homes. Moreover, heat pumps consume electricity, and whether or not the power source ticks the right green boxes and has capacity to fully substitute for gas varies from country to country.

The challenges of energy transition

Will the recent developments prompt us to kick our fossil fuel habit and embrace renewable sources of energy as well as innovative products? This is a sensitive issue because it would require a major change in industrial processes as well as our own behavior. Some high-profile European politicians such as Italian Prime Minister Mario Draghi and Robert Habeck, Germany’s minister for economic affairs and climate action, have made it clear such a fundamental change will involve personal sacrifices – like switching off air conditioning in the summer due to a possible lack of gas-generated electric power,4 or turning down heating in the winter because of gas delivery disruptions.5

Other challenges of a transition from a fossil fuel-dependent economy to a renewables-based one include the higher use of metals that a massive build-up of solar plants or wind farms would bring. According to the Bank of America, an electric car has six times the mineral requirements per vehicle of a car with a combustion engine, and wind power a mineral-content multiple between nine and 13 times compared with a gas power plant. Some critical minerals – silicon in solar cells, rare earth metals for wind turbines – are already in short supply, BofA pointed out.6

Our approach to impact investing: trust but verify

Investors, it seems, have been quick to adapt to the trend towards sustainability, increasingly swapping “polluting” stocks for shares of companies more aligned with environmental, social and governance standards. We for our part have a long track record of building portfolios around “clean technology” companies. Many of them provide products and services to make the world a greener place, which should also benefit their shares, in our opinion.

As active asset managers, and more specifically, impact investors, we are in the business of picking our portfolio positions carefully, looking at each possible candidate for a “clean tech” portfolio. This differs fundamentally from a passive asset manager’s approach of tracking a set of companies in a “sustainable” index. The names we choose meet specific targets, for instance contributing to at least one of our impact objectives (“impact pillars”) and one or more of the United Nations’ Sustainable Development Goals (SDGs). We also track the impact of our holdings using specific key performance indicators to illustrate the favorable impact. These measures include, for example, tons of carbon emissions potentially avoided, or the amount of cargo transported by rail rather than by truck. All in all, our approach to portfolio construction could qualify as “trust but verify”, a time-tested method.7

Note: Environmental, social and governance (“ESG”) investing and criteria employed may be subjective in nature. The considerations assessed as part of ESG processes may vary across types of investments and issuers and not every factor may be identified or considered for all investments. Information used to evaluate ESG components may vary across providers and issuers as ESG is not a uniformly defined characteristic. ESG investing may forego market opportunities available to strategies which do not utilize such criteria. There is no guarantee the criteria and techniques employed will be successful.

Where a specific company/issuer is discussed in relation to ESG, this is for informational purposes only as an example of their ESG activity and an overview of the impact and evaluation of such activity with respect to our ESG criteria and investment management processes. No assumption should be made as to the profitability or performance of any company/issuer identified or security associated with them. References to companies/issuers and/or other securities associated with them should not be considered a recommendation to purchase, hold or sell any security. 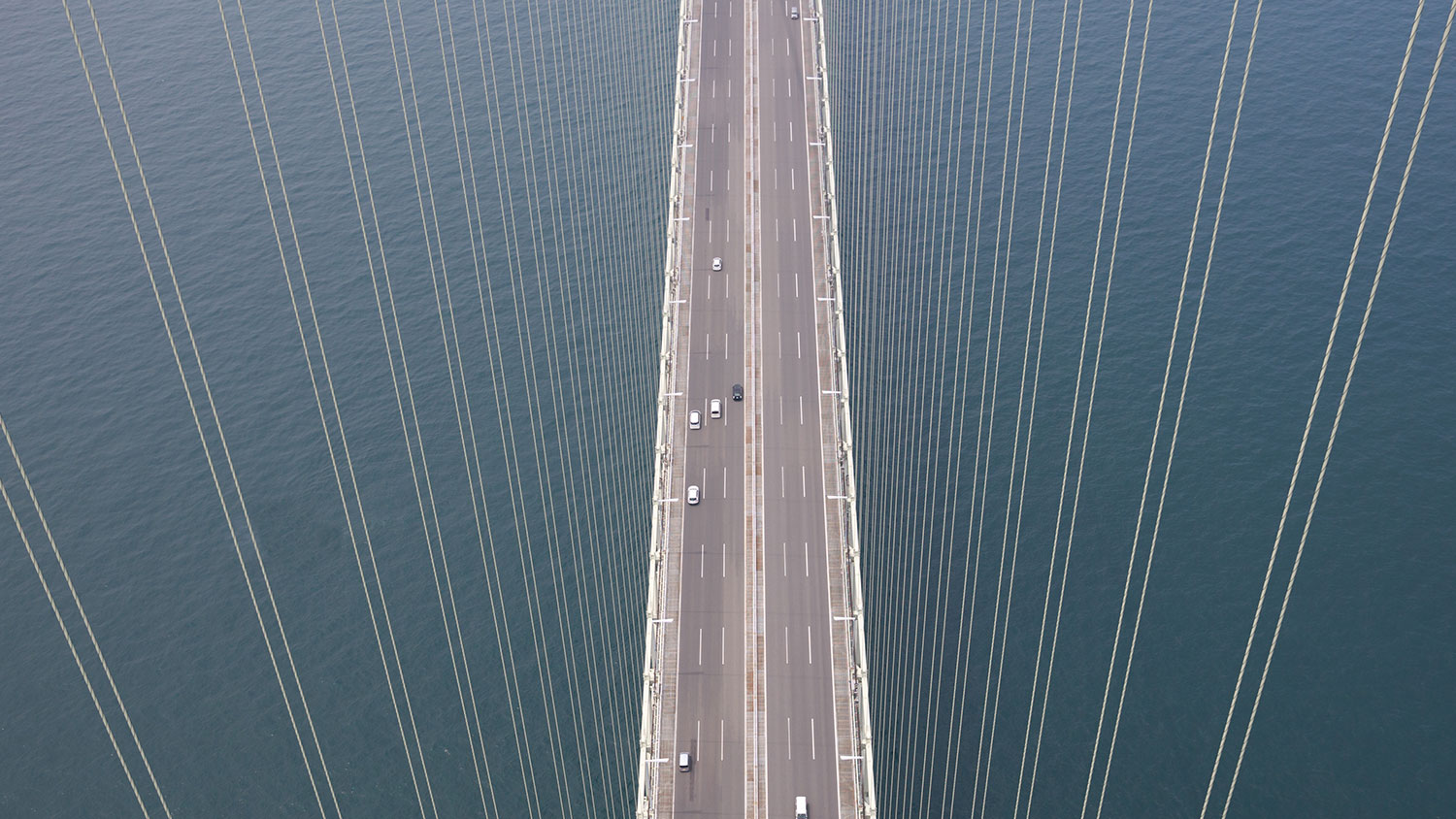 As stewards of client capital for more than thirty years, our aim is to provide portfolios driven by pragmatic investment choices. 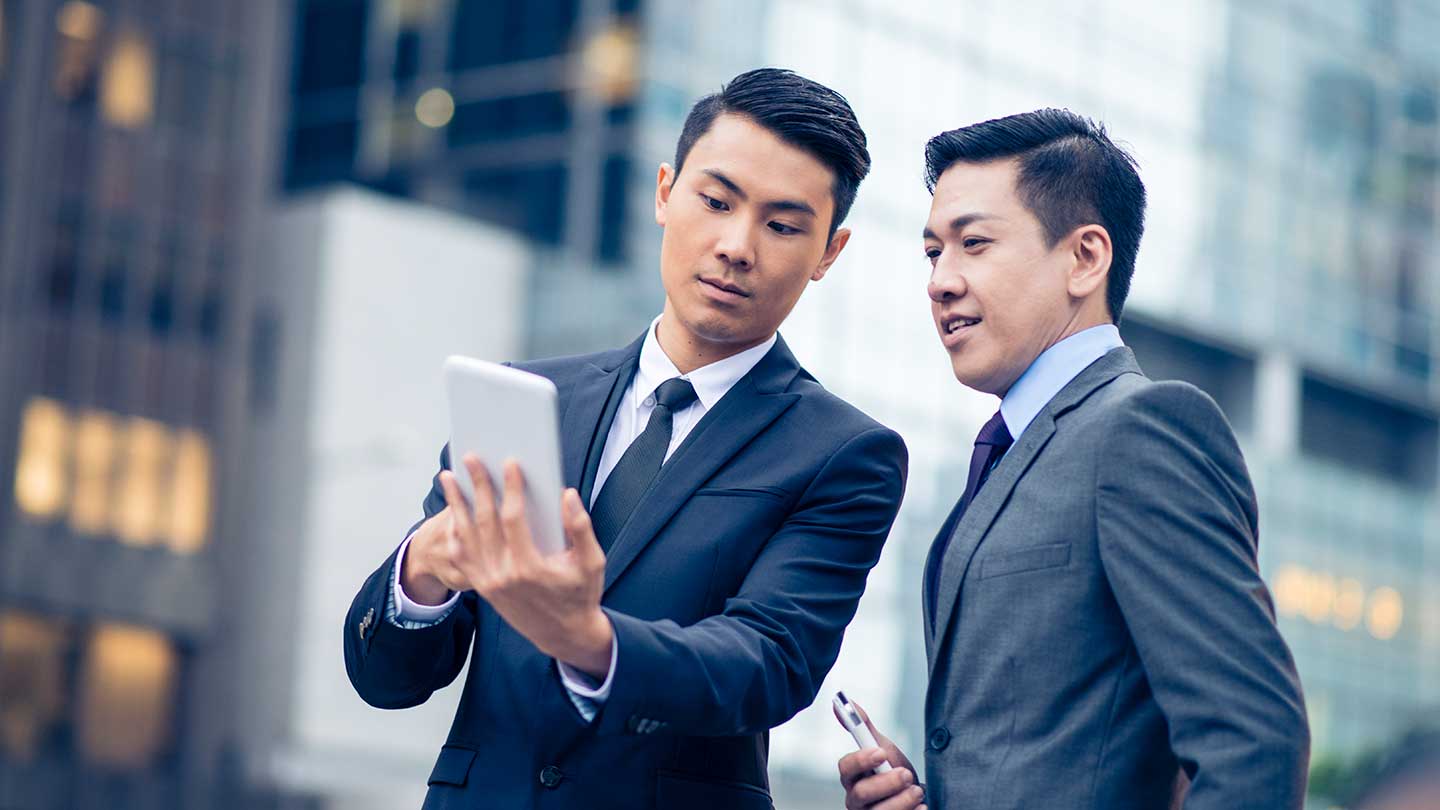 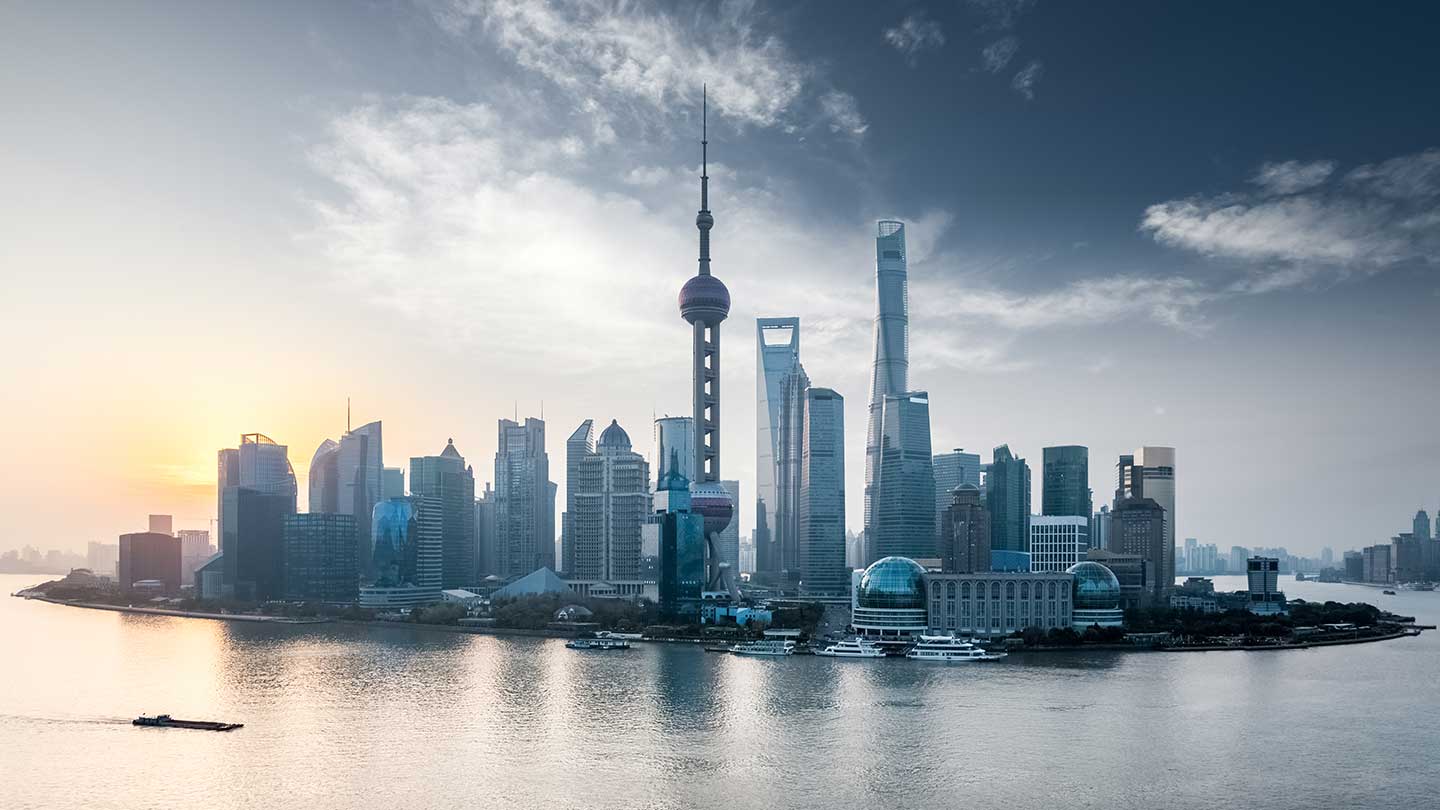