Around 1583, a young man sat in a cathedral watching a lamp swing back and forth. He noticed how regularly the lamp moved and timed it against his pulse, the only reliable time-keeping measure he had. That young man was the legendary Italian astronomer, physicist and engineer Galileo Galilei – and his discovery that each swing of a pendulum takes the same length of time led to the creation of the first accurate clocks.

Like the factors that influence the movement of a pendulum – angle, pivot point, amplitude of swing, and force of gravity – many factors influence market movements. And, just like a pendulum, once equity markets swing one way, they will swing back.

Back in the 1980s, Japan was one of the best performing markets in the world thanks to its manufacturing and technology prowess. At its peak, the Japanese market traded at a staggering multiple of 60x forward P/E. Over the decade, the Japanese Nikkei outperformed the S&P 500 by almost 200%. Investors wondered: Why bother to invest in US equities?

Japan’s growth started to fizzle in the 1990s and the US took its turn as economic growth boomed and technology took off. Then, following the dot.com bust, emerging markets became the driver of international performance. As a result, the MSCI All Country World Index ex-US significantly outperformed the S&P by nearly 400bps a year1

Since emerging from the 2008-09 financial crisis, the US dominated once again – the S&P 500 Index compounded at 13.5% per year, compared to 5.5% for the MSCI ACWI Ex-US. After such a prolonged period of US outperformance, investors are starting to question the value of investing overseas.

We know the pendulum will swing again and put another region in the spotlight. Individual markets run up, and then they fall (or even crash) back. Unlike Galileo, we cannot time when or how long it will take the pendulum to swing back, but by actively allocating to international equities today one can benefit from greater diversification and exposure to a unique opportunity set of strong businesses, while trading at a historically large discount to the US market.

The US is just one piece of the opportunity

Although the US stock market is the largest in the world with a value of roughly $30.4 trillion, it only amounts to about 44% of the value of global equity markets2. Further, while the US is a large, diversified and dynamic economy, the US accounts for just roughly 15% of global GDP and 4% of the world’s population. Despite itsbetter stock market performance, its economic growth has not kept up with emerging markets. Over the last decade, emerging markets were the fastest-growing economies with aggregate GDP growth of 5% vs 2% for the US, which means that the US’s share of the global economy is declining. Investing in international companies lets you directly access this faster growth.

Exchange rates can be an important component of returns, or a significant detractor. In a complex macro environment, exposure to international equities can be a good hedge against the risk of dollar depreciation. While the US dollar has appreciated relative to the main currencies in the last decade, as with shifts in market leadership, this has not always been the case. A period of dollar strength in the 1990s was followed by a considerably weaker greenback from 2001 to 2008. The currency has been on a decade-or-so long recovery ever since. Investing internationally can provide more resiliency when currencies swing. 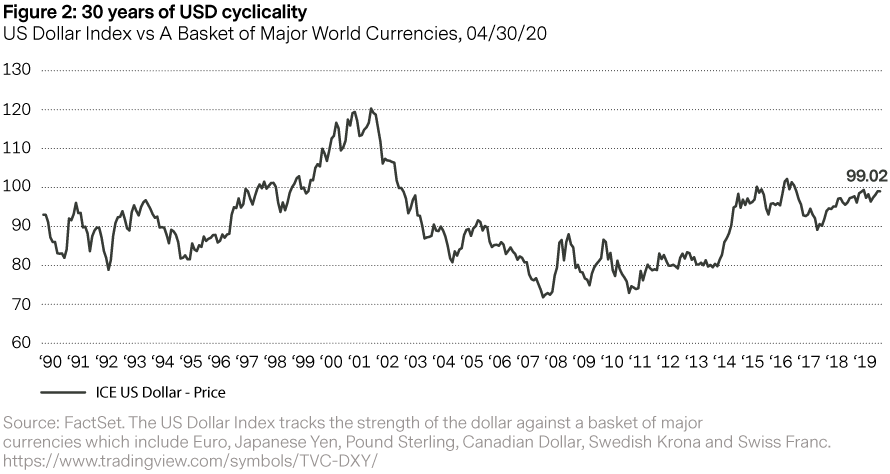 The US is home to a number of the world’s top companies – Alphabet, Apple, Microsoft, to name a few. However, in some industries, international companies are dominant. Take the consumer staples sector, for example. Europe is home to many of the most well-known global consumer staples businesses in the world. Companies like Unilever, Nestle, and Anheuser Busch InBev have larger exposure to faster-growing emerging markets than their US-listed peers. In emerging markets, we also find high-performing, consumer-oriented companies such as Walmex, the largest retailer in Mexico and Central America. We believe Walmex provides investors with exposure to the best of both worlds – a higher growth opportunity and good management and corporate governance (Wal-Mart is Walmex’s largest shareholder with a 71% stake).

Walmex’s growth opportunity comes from market consolidation (small “mom and pop” retailers account for 60% of the market in Mexico) by offering customers lower prices and better service. In addition, Walmex benefits from increasing income per capita among Mexican households. In the last twenty years, Walmex has been compounding profit growth by 12% in USD terms, two times faster than Walmart’s. Over the same period, Walmex’s stock outperformed its parent company by 230% on an accumulated basis. 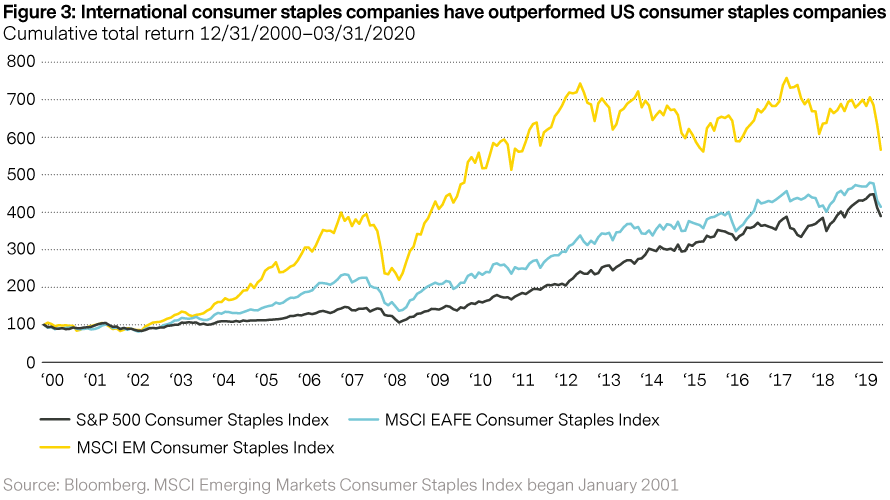 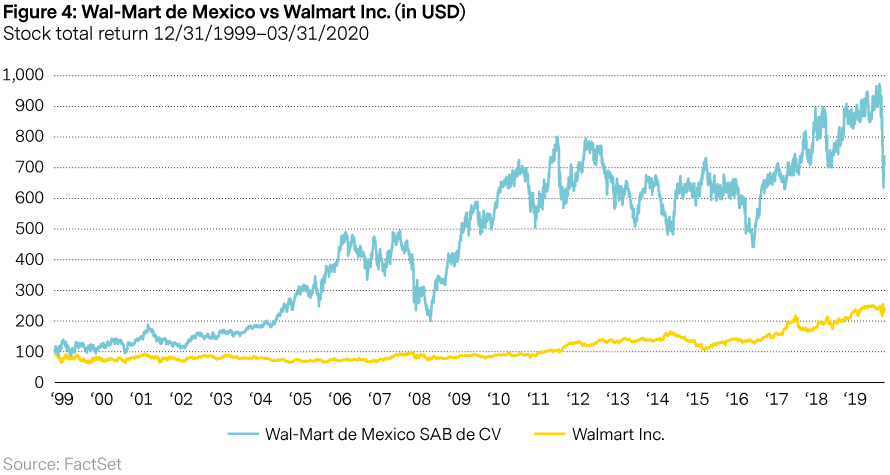 In addition to consumer staples companies, some of the best performing stocks in the consumer discretionary and industrials sectors are also located outside of the US. So if you enjoy a fine champagne or appreciate a fashionable purse or stylish watch, you are probably a customer of one of the global luxury companies based in Europe, such as LVMH, Hermes, and Richemont. And every time you board an airplane, it is most likely powered by an engine manufactured by a European company, such as Safran, Rolls-Royce, or MTU Aero Engines. We see engines as the most profitable and predictable segment of the aerospace industry. Unfortunately, for a US-dedicated investor, there is no direct way to get exposure to this space. You can only access this end market through one of the two large US conglomerates, GE or United Technologies, which also expose you to a swath of other less attractive businesses.

Banking is another industry moving at a very different speed in international markets. For example, HDFC Bank in India ranks as one of the top global banks in terms of earnings growth and profitability. In the last decade, HDFC Bank’s earnings compounded at 23% per year (in USD) compared to a quite respectable 9% for US bank Wells Fargo. While developed market banks continue to struggle for loan growth in general, HDFC Bank has averaged loan growth above 20% for many years as India’s middle class swells and millions move into formal banking for the first time.

Investing only in the US excludes these opportunities. Why invest with one hand tied behind your back? 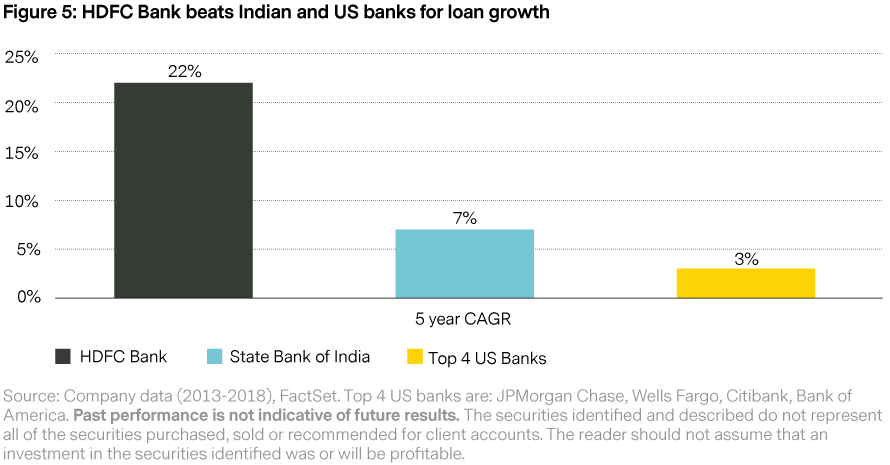 Greater opportunities for active management outside the US 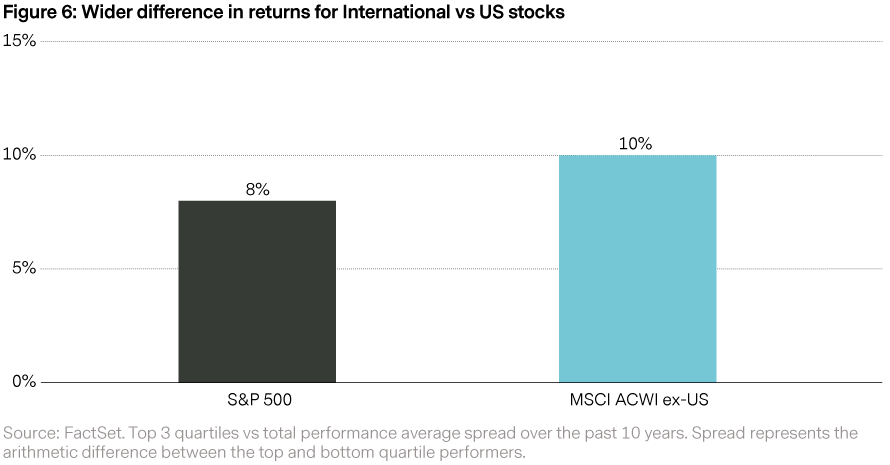 “Some of the best performing stocks in the consumer staples, consumer discretionary and industrials sectors are located outside of the US.”

The US market has become relatively expensive, with the MSCI US trading at an average of over 20x forward P/E. As a result, international benchmarks are trading at the largest discount to US indices of any point in the last 20 years. The risk that the discount to the US will continue to widen is lower. The upshot is that investors without international diversification may be at greater risk of future underperformance. Valuation spreads between the US and the rest of the world could reverse going forward. Looking back over the past decade, it isn’t surprising that the US outperformed international markets as the earnings of the S&P 500 companies grew faster than international ones driven by its higher weight in certain growing sectors – health care and information technology. The US was also helped by better capitalized banks.

Interestingly, if you adjust for the difference in the markets’ sector weightings, the historical earnings growth gap declines meaningfully as shown by Europe’s significant improvement as shown in Figure 8 (Annualized EPS Growth 2006–2019).

Going forward, EPS growth is forecast to be much higher, even across markets (Figure 8). The valuation and performance could therefore normalize between the US and the rest of the world.

“The upshot is that investors without international diversification may be at greater risk of future underperformance.” 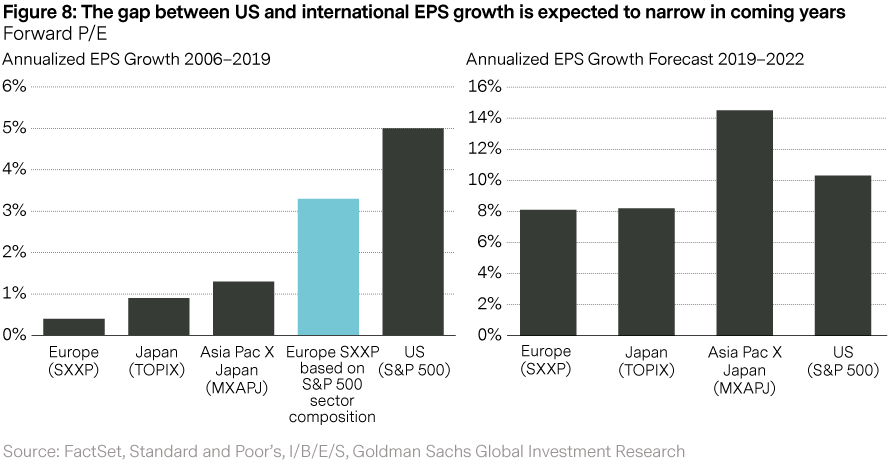 As Galileo witnessed over four centuries ago, when the lamp swings one way, it is followed by a swing in a different direction. Even though international markets have underperformed the US in the last decade, we know the pendulum will swing back. At Vontobel, we have a deep history of managing a concentrated International strategy, where we aim to invest in consistently growing businesses that can provide meaningful returns with less risk than the market.

By seeking to invest in high quality growth businesses outside of the US, an investor can gain exposure to greater opportunities in market or industry segments at relatively compelling valuations, with the diversification of macro risks. We believe that a diversified portfolio invested in both domestic and international equities is the most sensible approach for long-term investors. 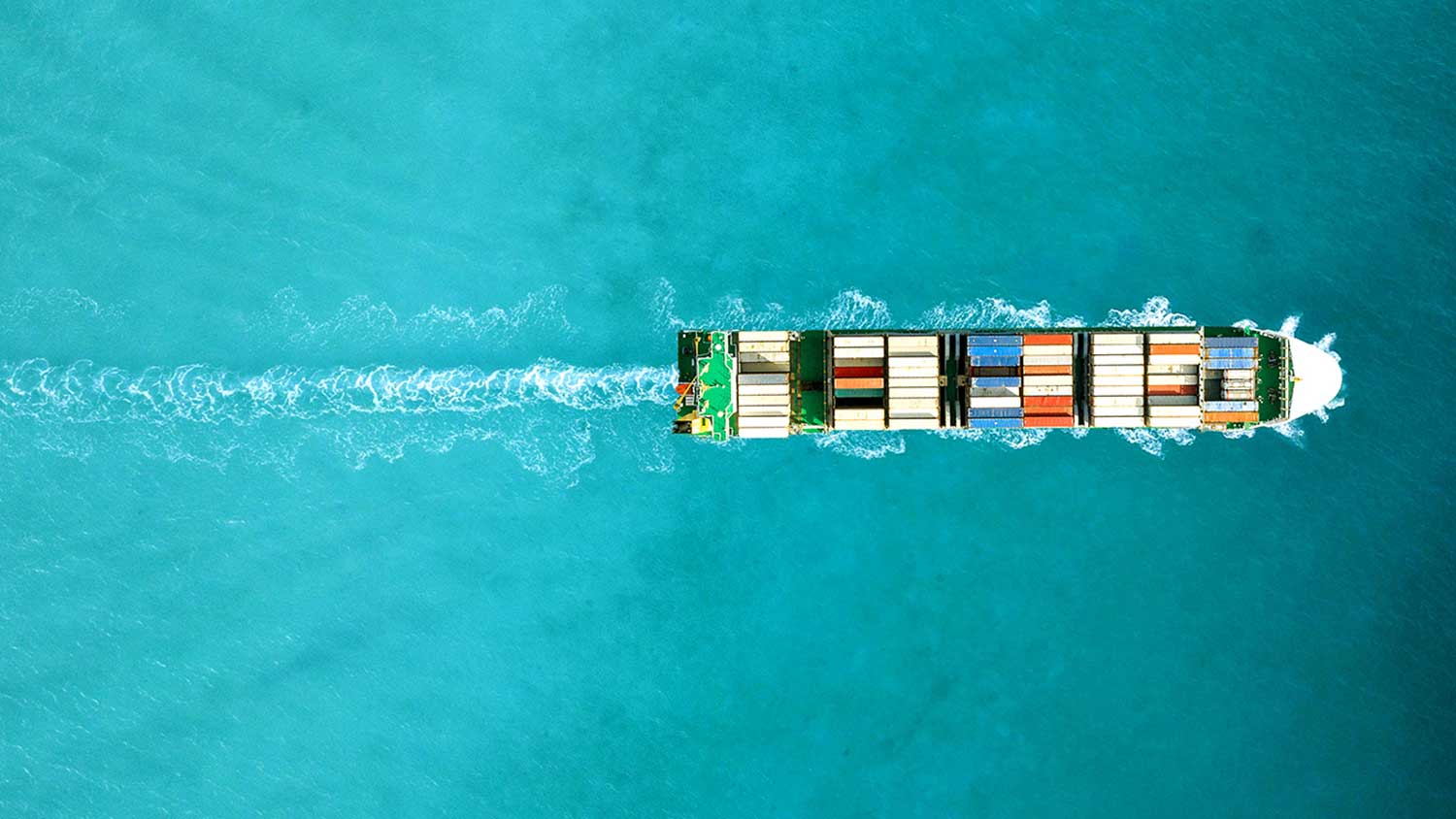 Access stocks of developed and emerging countries outside the United States. 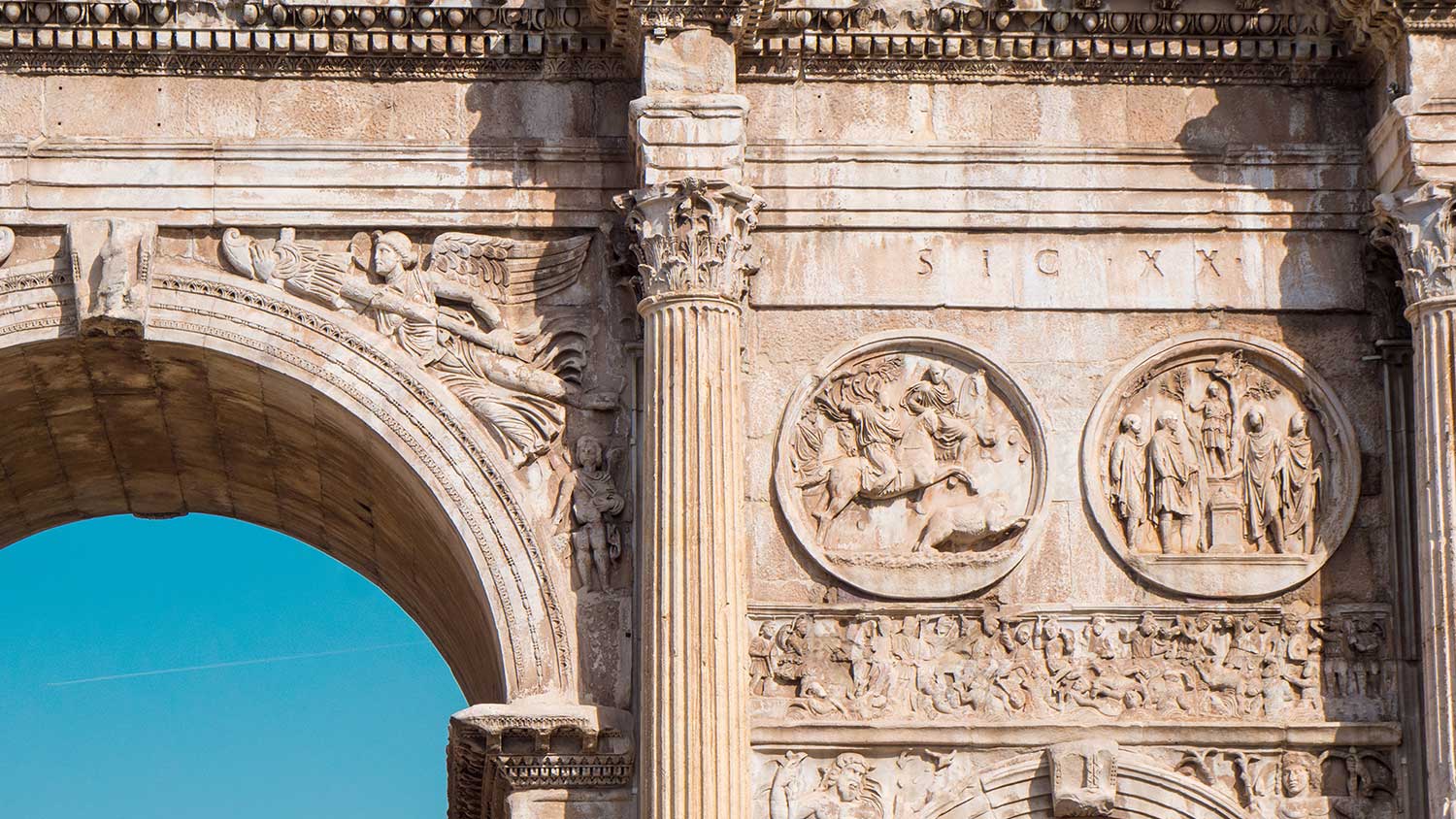 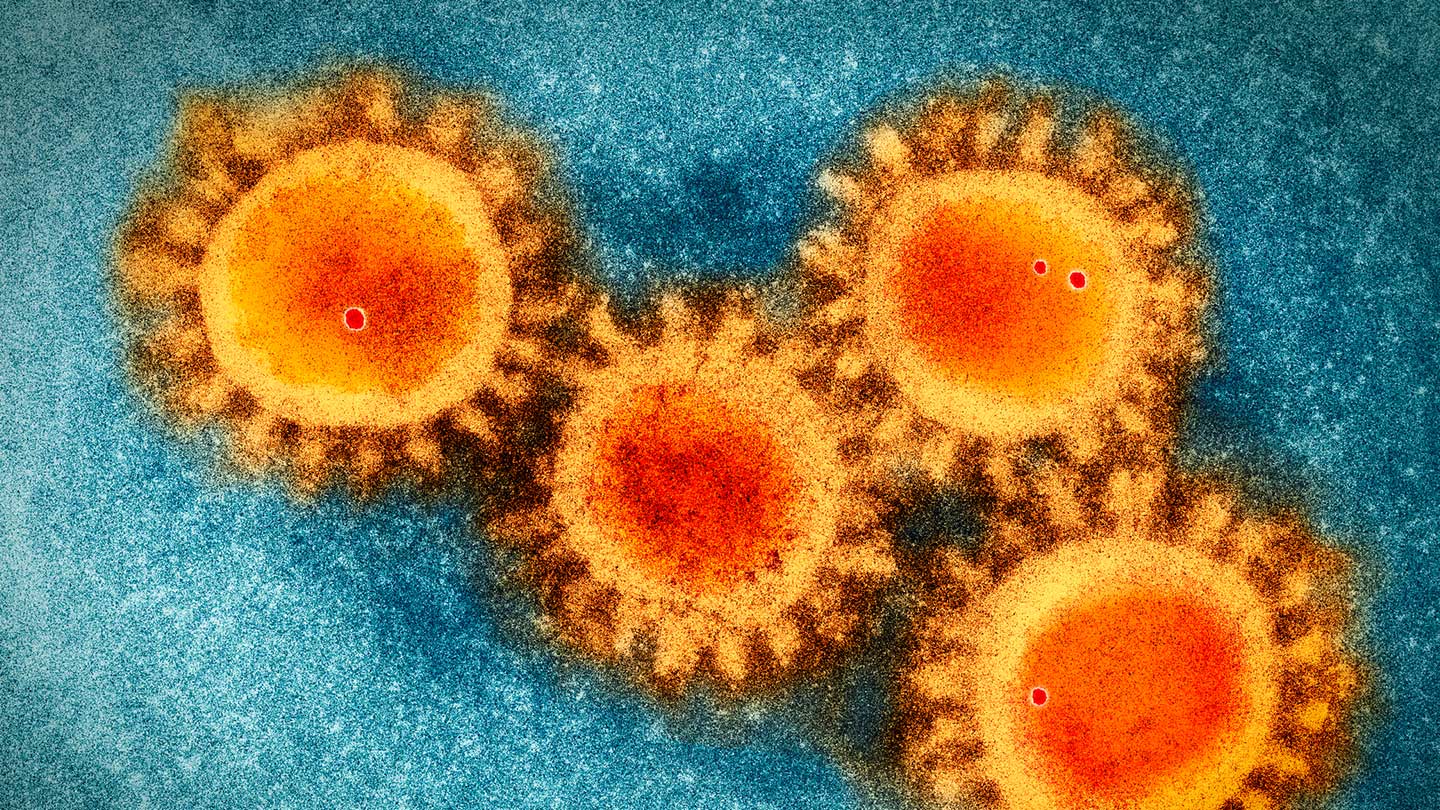 We are now witnessing a market panic as the continued spread of the coronavirus is threatening a global recession. Portfolio managers Ramiz Chelat, Jin Zhang and David Souccar explain how they are adjusting their portfolios to take advantage of market dislocations and why quality growth businesses can help provide downside protection. 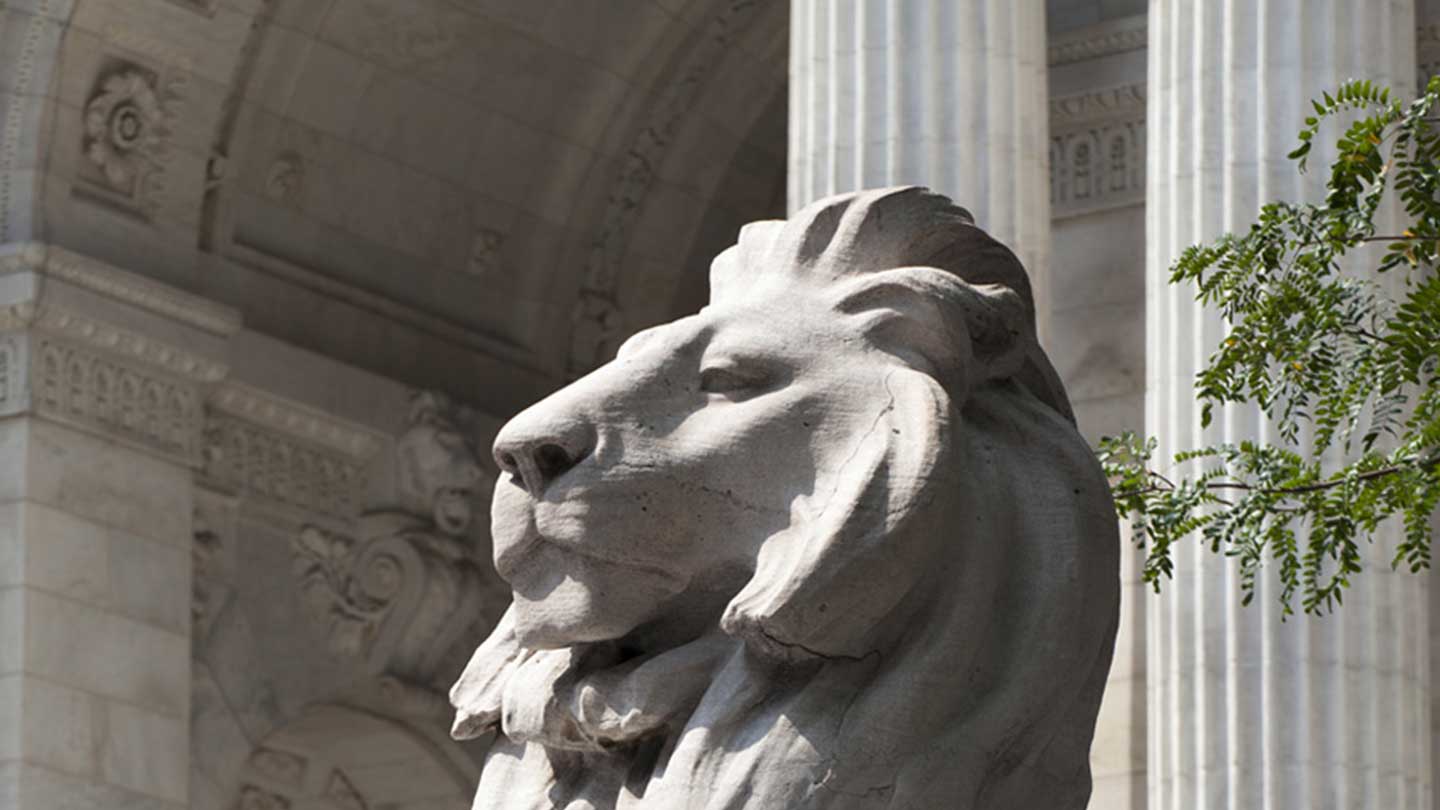